While the weather could have been better for the New Canaan Chamber of Commerce’s annual Halloween Parade, hundreds of ghosts and goblins headed over to the YMCA for a Halloween Family event. 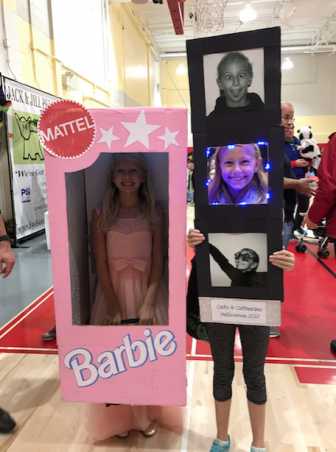 From the Chamber of Commerce’s Oct. 29, 2017 Halloween event at the New Canaan YMCA.

The party started at noon with activities and entertainment for all to enjoy. The School of Rock serenaded parade goers with Halloween tunes and a flash mob of New England Academy of Dance zombies danced to “Thriller.”

Pet Pantry hosted the Great Scirico who created balloon animals for all to enjoy and “Marshall” from Pet Patrol was on hand to greet trick-or-treaters thanks to Toddlertime Nursery School. We are so grateful that the YMCA stepped in to save the day and allowed us to have the event in their beautiful new gym.

We gave out more than 750 goody bags and thanks go to Joe Vittoria —Promotion in Motion, Camp Playland, Jack and Jill Petsitting, Friends of Mead Park, TD Bank, Mackenzies, Walter Stewart’s Market, Vineyard Vines and Toddlertime Nursery School. Finally, our sponsors and helpers that step up year after year who include, Bankwell, Dunkin Donuts, Jaafar Tazi Salon, New Canaan Pediatric Dentistry, NC Advertiser, Nurenu Brand Marketing, The Toy Chest and New Canaan Public Works. New Canaan merchants also made the day possible by having candy on hand for a round of trick or treating at the Y.

The Chamber owes thanks to so many that helped, from our terrific sponsors to the mothers and daughters of the National Charity League—Canaan Parish Chapter for stuffing and distributing the goodie bags. Looking forward to next year already.