The Brick Barn at Mead Park is historically significant. Constructed in 1911, it was a stable for horses used to deliver kerosene to local residents. Standard Oil’s delivery wagon filled its tanks and five-gallon containers to deliver to farms and retail stores, to the town for street lighting, public building heat and lighting, and to residential customers for lighting their oil lamps and fueling their oil heaters and stoves. During World War II Red Cross ladies met at the barn and rolled bandages and knitted for the troops. During and after the war the Town Band and the Veterans of Foreign Wars Fife & Drum Corps practiced patriotic music at the Barn to play for residents. 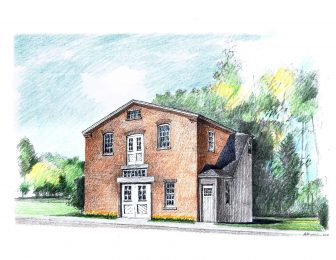 The Brick Barn at Mead Park is architecturally significant. “As probably the last remaining example of such a delivery stable in Connecticut, this barn has great historic, cultural and architectural significance” said Bruce Clouette PhD, an independent Industrial Archeologist who has for 40 years prepared National Register nominations all over the state. I have enjoyed the Brick Barn’s architecture for decades — the massive lintel over the garage door, the arched windows and door. I’m proud of New Canaan’s Modern houses and its architectural diversity.

Sadly the Town has allowed the Brick Barn to deteriorate, such that it now has a leaking roof and broken windows. This is destruction by neglect. Yes, occupants of buildings around The Brick Barn complain that it blocks their view of the park. Well, the Brick Barn was there long before they were. The Brick Barn predates even Mead park. The large beautiful cottonwood trees behind the barn actually block out more of the park. I am grateful that New Canaan residents with vision and energy preserved the Powerhouse at Waveny, the Carriage Barn at Waveny, and the Gores Pavilion at Irwin Park, each of which was at one point unused, in disrepair, full of trash, and considered for demolition. Today they are gems of New Canaan.

4 thoughts on “Letter: Preserve the ‘Brick Barn’ at Mead Park”