The dolphin, the eagle, the downward-facing dog, the extended puppy—yoga poses are full of animal references. 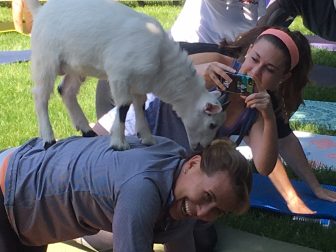 A baby goat climbs aboard town resident Dionna Carlson during a ‘Goat Yoga’ class outside New Canaan Library on May 30, 2018. Credit: Michael Dinan

On Wednesday afternoon, dozens of locals gathered on the lush green lawn of “Christine’s Garden”—the New Canaan Library property at the corner of South Avenue and Maple Street—to practice the popular discipline with baby goats.

Organized through the library, “Goat Yoga”—led by a Hamden-based livestock rescue farm—sold out three sessions on a hot, sunny day in downtown New Canaan, two for teens and one for adults. 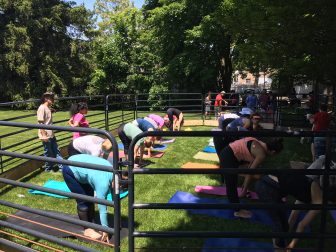 A Goat Yoga class in a corral set up at Christine’s Garden on New Canaan Library property, on May 30, 2018. Credit: Michael Dinan

“It’s an hourlong class with little goats running around, jumping on you, being obnoxious, eating your clothes or trying to, peeing on your mat, pooping on you,” Leah Hilton, co-owner of Nadeau Farm, said from outside a corral at Christine’s Garden while Tanya Sage led a class of smiling, laughing, photo-taking women practiced a “gentle” version of Eastern breathing and posing techniques inside it.

Asked what the appeal of goat yoga is, Hilton said with a laugh, “That is the appeal.” 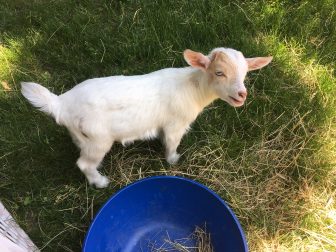 A “bottle baby” goat, rejected by its mother, has found a home with Nadeau Farm in Hamden and a job with ‘Goat Yoga.’ Credit: Michael Dinan

The working livestock farm has been in her husband’s family since 1939, Hilton said. This month, the farm—which includes 16 lambs, 19 young goats or “kids,” five Scottish highland cattle, two horses, two donkeys and dozens of ducks and chickens, all of them rescued—marked one year of offering goat yoga (on weekends at Nadeau and weekdays “on the road”).

The baby bgoats who are allowed in the pen with the yoga practitioners are up to 10 weeks old, Hilton said, and include “bottle babies” that had been rejected by their mamas. 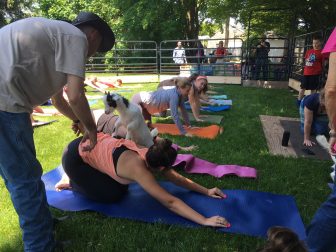 A baby goat gets a hand taking his position on a woman’s back during ‘Goat Yoga’ on May 30, 2018 at New Canaan Library. Credit: Michael Dinan

Cheryl Capitani, the library’s manger of services to families, said the Assistant Teen Librarian Samantha Connell did all the leg work to set up the goat yoga sessions. Priced at $10 per person, they sold out quickly.

“It’s going extremely well,” Capitani said. “We had a huge outpouring of interest.”

Referring to Nadeau Farm as a “rescue livestock sanctuary,” Capitani said the sessions are “a way for her [Hilton] to support their mission, so I think that’s pretty cool.” 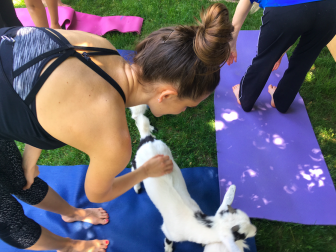 A rescued baby goat getting some love during Goat Yoga at New Canaan Library on May 30, 2018. Credit: Michael Dinan

“I loved it,” New Canaan’s Dionna Carlson said in an email after attending the day’s first session with her daughter, calling it “a great experience” with the “adorable goats.”

“Lightened my mood for the day,” Carlson said. It also was a “great stress reducer,” she said.

“I was happy not to have a goat relieve itself on my mat (or me),” she added, though a “couple of participants got this added bonus.”