New Canaan parks officials say they’re concerned that lingering winter weather may prevent fields from thawing and then drying out, meaning they won’t be ready for youth sports programs in town.

The frost has not yet come out of the ground, John Howe, superintendent of parks for the New Canaan Department of Public Works told the Town Council Wednesday during the group’s budget meeting, held in the New Canaan Nature Center’s Visitor Center.

“This is really the first year in 16 years that I am really nervous about this,” Howe said. 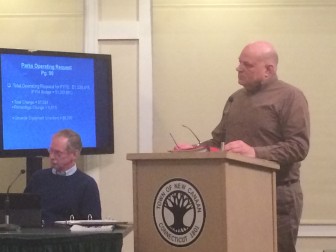 “We are dependent on the weather and the 15-day forecast for opening the fields looks ‘not good.’ Next week will be below freezing,” he added.

New Canaan, along with the rest of the Northeast, has been walloped by winter storms whose traces can still be seen around town, despite a couple of days in the past week that reached the upper 50s. Opening Day for New Canaan Baseball/Softball, the popular local program, is scheduled for about three weeks from now.

Some programs have been able to function because practices are held on artificial turf fields—for example, New Canaan Lacrosse Association youth programs at Dunning Field are underway.

Howe said that two artificial fields are clean and ready, and will be used by softball and baseball teams at the high school.

“But it’s wait and see,” Howe said. “I don’t’ have any confidence for the end of next week, and a lot of the programs are planning to start right after that.”

Town Council Vice Chair Steve Karl asked whether the town could treat the fields in some way to accelerate their readiness.

The fields must thaw out first, Howe said. The town prefers not to open the fields at all until the grass comes out of its winter dormancy and starts to grow, “but that’s not possible [this year],” Howe said.

“We will open when they are dry enough that we’re not causing substantial damage,” Howe said. “Right now with a little bit of frost in there, it’s the worst thing we could do to be out there. We cant even to mark them but people walking on that frost shears roots and really causes problems.”