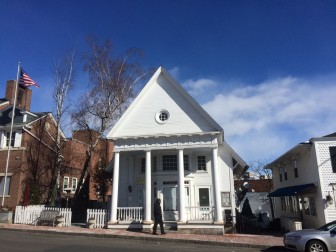 White paper covered the restaurant’s windows on Saturday morning, with the word ‘Closed’ written in black marker on one sheet. A staff member at sister restaurant Strada 18 in Norwalk confirmed that the New Canaan eatery is closed.

The restaurant, which opened in February 2012, was named as one of NewCanaanite.com‘s Top 5 Most Romantic restaurants. The timing of its closure just before Valentine’s Day is sure to come as a poignant surprise to many. It isn’t clear just why the owners closed the restaurant—a new one already is planned, a follow-up to Thali down the street, which has been closed for about three months. Owner David Raymer was not immediately available for comment.

The space that housed Boulevard 18—an 1868-built structure that’s owned by a Southport man, according to records on file with the New Canaan Office of the Assessor and Connecticut Secretary of the State—has been the site of several previous New Canaan restaurants. They include Aloi, Belmare, Running Fish, White Oak Bistro and L’Abbee. It also used to house Lissard House, an Irish tea shop and gift store back in the late 1980’s and before that was a VFW Post and a Knights of Columbus branch.

—Michael Dinan contributed to this report