Though it’s saved money for New Canaan and even generated modest revenue, concerns about aesthetics and environment are prompting town officials to end the practice of dumping the organic material dredged from Mead and Mill Ponds in the southwest corner of Waveny. 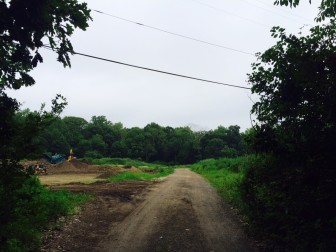 Entering the “cornfields” area at Waveny from the main path that runs by the pond—what NCHS cross-country runners under Bob Mosley will remember as “Sandy Straits”—on July 9, 2015. Credit: Michael Dinan

First Selectman Rob Mallozzi said his swift decision follows comments from residents that even though New Canaan is recouping some money from the dredged debris because it’s been sold to a local business that’s doing the considerable leg work of converting it into topsoil, “the wear and tear is not conducive to the ultimate goal of the preservation of that beautiful area of Waveny.”

Mallozzi had high praise for New Canaan’s Peter Lanni, who in past years has carted off the material from the area of Waveny known as the “cornfields,” and more recently has been working at screening and then carting off about 1,000 cubic yards of the debris, but said that on Thursday he informed the local man that “the town is not interested in continuing further.” 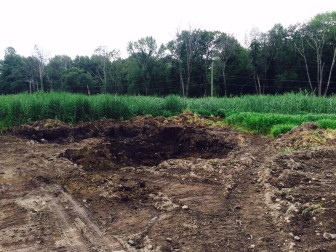 A look toward the southeast corner of the “cornfields” area at Waveny Park on July 9, 2015. Credit: Michael Dinan

“He graciously understood and agreed to work with [the Department of Public Works] to grade and restore the area. We have 250 more [cubic] yards to go on the contract and then he will leave and we will no longer be using the cornfields for dumping grounds of any organic material that we dredge up or move out of other spots. And I did that after consultation with the Park & Recreation Commission and private citizens, and just the feeling we all have that it’s a beautiful area. We’re very appreciative of the work that Mr. Lanni did in removing it, but we’ll put it back the way it was over a couple of years and there will be no more dirt disturbance in that environment.”

The matter had emerged as a major talking point at the Park & Rec Commission’s meeting Wednesday. There, Parks Superintendent John Howe explained that New Canaan when it dredged both Mead and Mill Ponds in 2008—under threat of losing the ponds themselves, their condition was so bad—there was no money available to cart the dredged material off-site and so it had to be kept somewhere and the cornfields at Waveny were selected. (New Canaan now does a smaller, maintenance dredge of both ponds in alternating years.) 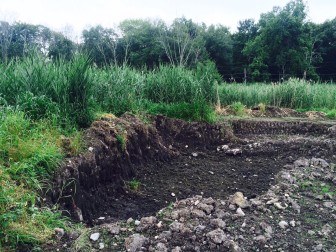 Another look toward the southeast corner of the “cornfields” area at Waveny Park on July 9, 2015. Credit: Michael Dinan

In more recent years, New Canaan developed the idea of actually selling on the dredged material to a company that could convert it into topsoil. In the last year, Lanni has taken the further step of screening the material itself on-site in the cornfields, Park & Rec Chairman Sally Campbell said at the meeting, and that’s led to a more comprehensive clearing of the cornfields area that has raised red flags for residents who frequent the popular and once-undisturbed corner of Waveny.

Town resident William Picard, attending the commission’s meeting, said of the state of the cornfields now: “It’s a massacre.” He added that the berms created in order to contain the dredged material appear to have been created near to a tree line, raising concerns that if any more dirt is removed from those areas in order to screen and create topsoil out of the dredged material, then the trees themselves will have nowhere to take root.

According to Mallozzi, about 250 cubic yards remains to be screened and removed based on the existing contract with Lanni, and then it will be incumbent on Park & Rec to find another place to store the dredged material. That could end up being a corner of the mulching fields off of Lapham Road, though it is unclear just now whether that’s suitable.

“We cannot just solve one problem and create another,” Mallozzi said. “We need to find a space near the mulch now to designate for organic material when the town comes into possession of it, a set-aside for this type of material other than the cornfields.”

Just what will happen with the cornfields themselves once the re-grading is finished is unclear, though Bob Seelert, chairman of the Waveny Park Conservancy, said his group believes it can “raise a substantial amount of money” in order to create a “very attractive, enticing area” within the cornfields.

“I believe that would be one of our projects and we could raise the money to do that,” Seelert said at Wednesday’s Park & Recreation meeting.

2 thoughts on “Mallozzi: Town To Halt Dumping of Dredged Material in Waveny Cornfields”