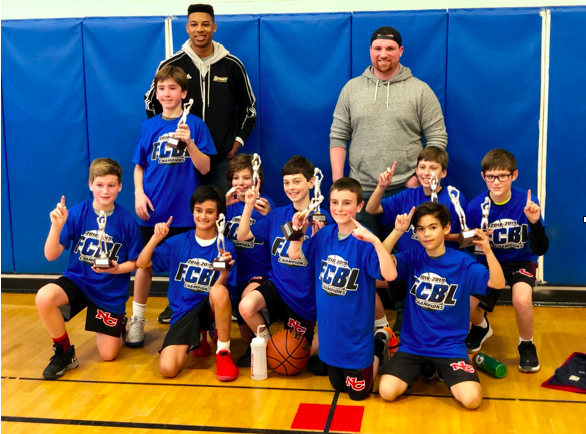 It’s March—and that ushers in a very special time of year for basketball fans. Long ago someone aptly called it “March Madness,” and for the parents and players of the New Canaan Chargers this Fairfield County Basketball League Tournament was most definitely madness, New Canaan style.

Having never played together as a team and under the guidance of a new coaching staff, the Chargers surprisingly got off to a quick start with three wins and one loss as they kicked off the 2018-2019 campaign.

But the back end of season was not pretty, as the boys finished the regular season with five losses over the last six games by an average margin of 14 points. Opposing coaches realized that the Chargers could not handle full-court pressure. No lead that the boys built in any game was safe and the team’s winning ways seemed a distant memory. At the end of the regular season, team confidence and morale were low, and the old cliché, “just have some fun” was heard uttered on occasion. Against that backdrop, a little bit of magic unfolded this past weekend.

Basketball is often described as the ultimate team sport. Five players, each playing a critical role in a team’s success, have to gel in terms of chemistry and understanding of each other’s style of play. And at 11 and 12 years of age, that process just takes time, hard work and great coaching. It’s an understatement to say that winning is expected in this town. But when you lose five of your last six, not so much.

And like the R.E.M. song, that’s where we “begin the begin.”

First up, the Yonkers Bulls, who have one of the most talented 5th graders in the league. Their star scored at least 15 of Yonkers 28 points from all over draining threes and converting some amazing drives to the basket. Keep an eye on this gifted young athlete Coach K. But as the game wore on, teamwork and tenacity began to return to the Chargers style of play.

James McInerney dominated the glass and began to showcase his newly found touch around the basket. Great team defense wore down Yonkers led by Brendan Bailey, Dylan Ho and Charlie “Hustle” Sulkowski. Cole Campisi slashed his way to the basket hitting key baskets to open a commanding lead, and Bo Seelert, carrying on the family tradition, knocked down a mid-range jumper that electrified the crowd. Chargers advance to the semis with a convincing, confidence boosting 39-28 victory.

The semi-final match against Trumbull looked very even on paper, and that’s just how it turned out. Reaching into his bag of tricks, Coach Dan tried something that many of us dads quietly asked for throughout the season, play James McInerney and Ryan Francis, our two centers, together. The “twin towers” dominated the boards and grabbed at least 40 rebounds between the two of them keeping New Canaan’s tight lead intact.

A total team effort with Ryan Bell throwing his body for loose balls, Benny Heagle orchestrating the offense brilliantly at point, and Gavin Dinning showing the type of physical play underneath that we all know he has. Final score NC Chargers 47 – Trumbull 44.

Onto the finals….Westport…bitterest rival all year and two hot tempered, regular season games where the teams split. Westport, who had eliminated New Canaan’s other 5th Grade Boys team, the Rams. Westport, where the parents have enjoyed a few less than polite exchanges over the years. Bring it on.

Westport is well coached, has a talented team and a very vocal fanbase. But New Canaan had a will to win on this day that was not going to be put down.

And like all dramatic sporting events, the magical, memorable moment came in the most pivotal exchange late in the 4th quarter.

Coming back from a nine-point deficit, Westport regained the lead with a 12-0 run putting them up 3 points with about 3 mins left to play. Timeout New Canaan. Taking the ball up the court, Dylan Ho drove the lane drawing a shooting foul. After hitting the first free throw, Ho missed the second and like a falcon swooping down on its prey, James McInerney crashed the boards, head to the basket and scored while drawing a foul. McInerney missed the and-1, but once again one of the young caped crusaders, this time Will Wunderlich, willed himself to grab the rebound, immediately drawing a foul in the process. In the bonus, Wunderlich had two free throws. No pressure Will—championship game tied and under two minutes to go. Wunderlich, according to Google translate, means “wondrous” or “fantastic” in German.

And that’s what Will did, he lived up to his name, draining both free throws, converting a New Canaan 5 point play, and putting the Chargers back in the lead for good. It’s moments like these that turn the tide and deflate your opponent. Chants of ‘MVP’ for young Will from his teammates, and most deservedly so.

And a big thank you boys from your moms and dads because as Henry Porter, the high school basketball coach who coined the phrase in his 1939 essay said: “A little March madness may complement and contribute to sanity and help keep society on an even keel.”