Our beloved Mom, Grandmother, Great Grandmother, Aunt, and friend, Marietta Yvonne James, 94 years young of New Canaan, passed away on May 3, 2020 after complications from a brief illness. 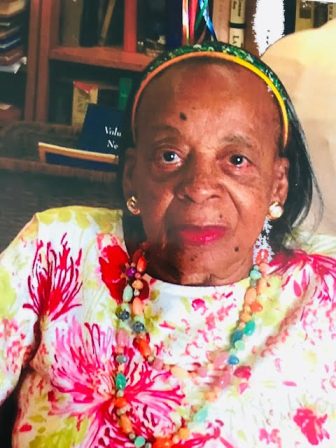 Born November 11, 1925 in Drakes Branch, Virginia, to the late Marshall and Elizabeth Banks Walker. She received her elementary education at Organ Hill Elementary School in Drakes Branch and her high school education at Central High School, Charlotte Court House, Virginia. After high school, she worked for a year then joined the U.S. Cadet Nursing Corps where she attended Lincoln School of Nursing in Durham, North Carolina.

In 1947, she moved to New Canaan to join her Mother and older brother, Marshall Walker. In 1949, she married in the New Canaan Community Baptist Church and subsequently started a family raising four children. She served in many capacities in the church over the years including the scholarship committee where she was strategic in seeking funds to assist with student tuitions and needs. She had been very active in various community organizations and Town Departments; including Planned Parenthood; the Committee of Christian Concern; NAACP; Police Department as well as serving as a Justice of the Peace. She also marched on Washington in 1963 with the local chapter of the NAACP, founded by New Canaan resident Lucius Griggs.

Marietta worked in a number of jobs over the years and thrived on meeting and socializing with co-workers and friends alike. She was also known for her catering skills and prepared tasty cuisine for many resident parties. She was a great cook! Among her favorite tasks in life was the joy that she felt as the “House Chef” for the “ABC” A Better Chance House in the early years of its inception. That position gave her great pleasure as she connected with the kids and kept them on their toes.

Most important to Marietta was the care and active participation in the lives of her four children and grandchildren. As a sports Mom she helped wherever needed, team breakfasts and dinners and such.

Known to her Grandchildren as Gram and her Great Grandchildren as Great Marietta she will be remembered as a strong, honest and forthcoming woman who wanted only the best for her grandchildren. She showed up when it mattered most or when they needed assistance in life. She was a strong believer in education and supported all efforts for them to fulfill their education. They learned a lot from their Grandmother and she will always be the matriarch of the family.

Marietta is survived by her daughters, Beatrice James Watkins and husband William (Butch) Watkins of Norwalk, CT, Jennifer James Venneri and partner Daryl Cooper of Westchester, NY, and Pamela James of Norwalk, CT. She also leaves her beloved grandchildren Michael James (Natasha), Barrett Venneri, Rocco Venneri, and Toran James. She is also survived by her great granddaughters Anabel James and Fallon James. She is also survived by her daughter-in-law Charlise James and many nieces, nephews, and loving friends. She is predeceased by her son, Lemuel (Lem) James, her sister Evelyn Bartee, and brothers Marshall Walker, William Walker and Cecil Walker. She leaves one brother Shedrack Walker of Virginia.

She was the strength and spirit of our family with her strong will, common sense requirements, “The Look” method of discipline, and glorious love of life. We will cherish her forever.

Burial will be private at Lakeview Cemetery. The family will hold a memorial celebration of life when it is safe to congregate, commemorate and celebrate the life of our loved one.