She’s been making plates, bowls and beads for necklaces for about 11 years. 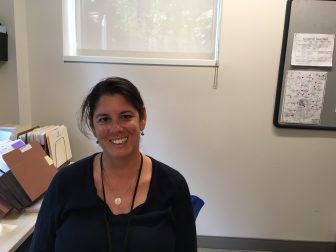 “I’m not that good,” Brooks Avni said on a recent morning from her office at Town Hall.

Yet the work keeps her calm.

“You get out your aggressions in a more constructive way,” she said. “It takes a lot to aggravate me.”

That may come in handy.

In taking over as the municipality’s first permanent town planner in about one year, Brooks Avni will work as co-director of land use for New Canaan—serving as senior enforcement officer with respect to the New Canaan Zoning Regulations, as well as a resource and advisor to both the Planning & Zoning Commission and Zoning Board of Appeals.

Brooks Avni said she has been made to feel “very welcome” by her colleagues at Town Hall and the wider community.

“Everyone’s been wonderful,” she said.

“I look forward to diving in and getting to know everyone. I’ve met a lot of the Realtors, I’ve met many of the attorneys who popped in even during my first week here. People stopped by from other departments and they were like, ‘Oh are you the new town planner?’ I’ve walked around downtown a couple of times and been told, ‘Are you the new employee at Town Hall?’ I’ve walked around the neighborhoods. I recognize that it’s a very prominent position.”

As she starts her tenure as town planner (her first day was July 23), P&Z is working through a widely discussed application to rebuild the Canaan Parish housing complex at Lakeview Avenue and Route 123.

As town planner, Brooks Avni will work with applicants and field questions and concerns from neighbors while advising volunteer bodies such as P&Z that make final decisions, at times with counsel from the town attorney.

A Scarsdale, N.Y. resident, Brooks Avni has worked as a city planner for New Orleans and senior planner for New Rochellle, and most recently held the position of director of planning and development for Ossining, N.Y. She holds a bachelor’s degree in English from the City University of New York-Queens College and a master’s degree in Environmental Science with a concentration in Community and Land Use Planning from SUNY College.

Asked about what attracted her to the job in New Canaan, Brooks Avni said that through a “thorough” interview process she felt that the town was a good fit.

Asked whether anything has stood out as unique about New Canaan in the early-going, Brooks Avni said, “Every place is unique.”

New Canaan has gone about one year without a permanent town planner.

Steve Palmer had stepped down from the role in September 2017 and Keisha Fink served during the intervening months as town planner on an interim basis. (Fink is staying on as New Canaan’s first assistant town planner, a part-time role that will add headcount in a municipal department widely thought to have been understaffed.)

Brooks Avni said it’s been “awesome” to join a land use team at Town Hall that includes longtime municipal employees with deep local knowledge in areas such as building, health and inland wetlands.

“Everyone here has been super welcoming and very helpful,” she said. “I haven’t gotten the surprise quiz yet about ‘Do I know everything yet?’ The people—the business owners, the residents, everyone from start to finish—when I have gone up to the counter and I don’t know the answer right there, people have been super accommodating and understanding.”

She added: “Every place has its own problems and every place has its own neighborhood issues. So, whether you live in a really small community or large community, or urban or rural, some of the problems are similar. We all are possessive over what happens with the property next door. We all get overly protective. It’s because we love our home. We love our neighborhood and we appreciate all the value that is there.”

For Brooks Avni, the warm welcome at Town Hall has made an important difference already.

“It’s been a pleasure to come to work every morning,” she said. “That makes for a really great day. No matter how many problems you have, no matter how many angry neighbors call you, if you enjoy coming to work and you enjoy working in the community you’re working in and working with the people you do, it’s much better.”