With rain in the forecast and work still needed to make sure New Canaan kids can play safely on our town fields, officials decided this week to forego painting Main Street red, white and blue for the hugely popular Memorial Day parade.

First Selectman Rob Mallozzi said he’s asked the Department of Public Works to focus on readying the fields instead. 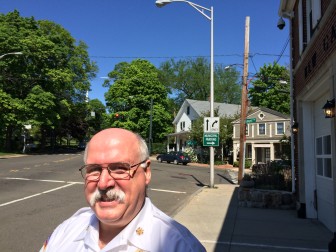 “Last year those guys did a great job, but it got washed away,” Mallozzi told NewCanaanite.com. “In order to get it right, we’d have to devote a large part of the crew to block off the road with sawhorses and set up barriers on either side, and there’s so much concern about the fields, that I decided to focus on that instead.”

He added that Parks Superintendent John Howe was eager to get the street-painting done, but has been asked to hold off.

“The flags are beautiful on Main Street and we’ll have the parade whether those lines are red, white and blue or not,” Mallozzi said.

The parade starts at up at St. Mark’s at 9:30 a.m. Monday and, anchored by Grand Marshal John Wilson, will run, as tradition has it, down to Lakeview Cemetery. There, the Rev. Eric Fjeldal of the United Methodist Church of New Canaan will give the Invocation and Benediction, and we’ll hear from U.S. Navy veteran Gary MacIntyre, this year’s guest speaker.

The Line of March will be posted Thursday, according to the town’s website. 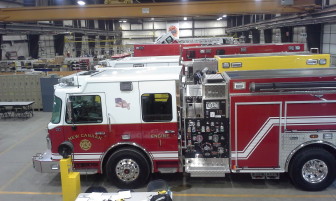 That’s also when the New Canaan Fire Department is expecting its new pumper truck to arrive—a $575,000 (so far, and it’s under budget) vehicle that Fire Chief Jack Hennessey said will be the first responders’ “primary first-response pumper.”

“It’s replacing another truck that’s older,” he said. “This truck will be going out the door first for just about every call we have.”

It includes a 750-gallon water tank as well as hoses (“This is basically what puts fires out,” Hennessey said) and is the centerpiece of a fleet that also includes a rescue truck (mostly tools) and ladder truck (ladders and equipment). The Memorial Day parade will be New Canaan’s introduction to the new vehicle.