The two designated, on-street loading zones—on South Avenue just off of Elm Street and on Main Street in front of what’s now the post office—are overused, according to Police Chief Leon Krolikowski. 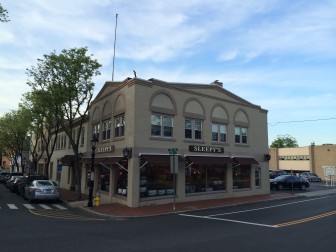 New Canaan’s Police Commission on May 20, 2014, doubled the number of authorized loading zones downtown for delivery trucks, from two to four. One new zone is up on Elm Street, the other one here on Forest Street, just off of East Avenue in front of Sleepy’s. Its’ a three-month trial. Credit: Michael Dinan

So, the town now will add additional loading zones—from 7 to 10 a.m. on weekdays—on the very first stretch of Forest Street as you turn in from East Avenue (in front of Sleepy’s) and on Elm Street between the alley next to Chef Luis, and Park Street.

“What we’ll do is once we get these in place is create some sort of notice with the areas where they park and give it to all the normal drivers that are delivering every day,” Krolikowski said Tuesday during the regular meeting of the Police Commission, held in the training room at the New Canaan Police Department. “And if they don’t listen, enforcement follows. It will relieve some of the congestion, not all of it.”

The commission unanimously approved the measure on a 3-month trail basis. 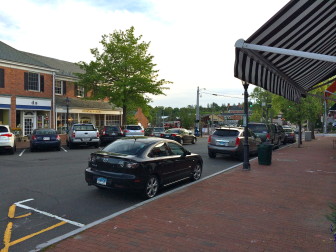 The New Canaan Police Commission at its May 20, 2014 meeting decided to approve a three-month trial whereby the stretch of Elm Street between the alley at Chef Luis, and Park Street, will be designated on weekdays from 7 to 10 a.m. as a loading zone for delivery trucks. Credit: Michael Dinan

Concerns about double-parking trucks—especially at Main-and-Elm and Main-and-East Avenue—have been portrayed, in part, as sightline and safety risks for pedestrians.

The newly designated Forest Street loading zone must be watched closely, the chief said, because of the construction project starting this summer at the other end of the block.

“We’re not sure how that’s going to affect things, but why not do it now so that everyone gets used to it?” Krolikowski said.

Towns such as Greenwich and Westport have very specific times of the day when deliveries are allowed, and it’s possible that New Canaan—which to this point hasn’t been as stringent about the practice—may have been viewed by truck drivers as a town that can be hit at any time, the commissioners said.

Here’s an interactive map that shows all four loading zones soon to be in place—click on each pin for more information: