New Canaan High School senior Chris Andrews calls his four years here in town, as a student-resident in the A Better Chance or “ABC” program, “a blessing.”

Andrews said shortly before a special dinner in the Locust Avenue home Wednesday that he’s not only met many people he wouldn’t have met otherwise, but also developed interests he may not have discovered—for example, his plan to study computer science at Penn State University in the fall was born from his experience under town resident and ABC host Michael Donnelly.

“My host dad is an IT guy in a firm and he really helped me along the way, finding what I want to be,” Andrews said from the living room at ABC House, surrounded by fellow ABC student-residents as well as figures who were at New Canaan High School as students, administrators and faculty members in 1973, the year the program was founded. 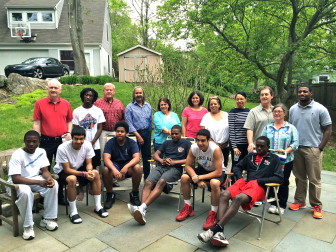 Here’s a slideshow with seven of the eight current ABC House of New Canaan students. Just hover with your mouse over their photos for personal information and quotes from each student. Absent is NCHS freshman Markiz Harmon. Article continues below.

NewCanaanite.com had a chance to interview some of the former students and administrators prior to the dinner that Jones prepared (chicken-and-peppers kebabs, roasted potatoes, green beans and Caesar salad). 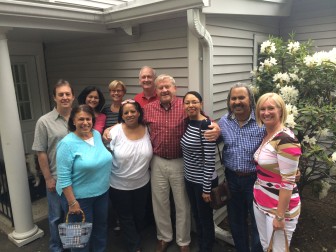 Benson, a New Canaan resident who works as a nurse on the maternity floor at Stamford Hospital, said she was among the group of students who pushed to get more African-American students at the high school—there were 22 at the time, in a student body of about 1,700.

Soon the program was in place and Benson’s own sister went to prom that year with an ABC student (whose first name was ‘Terry,’ she couldn’t remember the last name, though no doubt our reliable “If You’re Really from New Canaan, you’d know …” Facebook group will fetch that name immediately).

“It just was a different feeling in the whole school, in the sense that we had more people to participate in more activities,” Benson said. 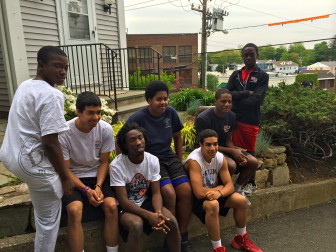 Benson was joined by Jennifer James, whose mother Marietta James was one of the original ABC cooks. Jennifer James also had the exact same years at the high school as then-principal Haas (’71-’75).

Haas, a town resident who serves on the board of the New Canaan Community Foundation, said the time was right for the introduction of the ABC program at the high school.

“I had at New Canaan High School during a very rough time in the 1970s—Civil Rights, Nixon, Watergate, Vietnam, all of those things going on, heroin and LSD,” he recalled. “But I had a small group of African-American kids in the school, and nearly all of them were girls.”

When Haas learned of a program that would bring in more African-American students, and boys, he became an immediate and enthusiastic supporter.

Town residents John and Laura Walsh—New Canaanites for 23 years—took over as co-directors at ABC last year. The youngest of their three kids graduated NCHS in 2012 (now a sophomore at Rochester Institute of Technology), and Michael Curran tapped the Walshes when he took over as board president for Jim Slattery.

“You’ve got eight teenage boys so there’s always something going on,” Walsh said with a smile prior to dinner. “They’re great kids.”