The New Canaan Baseball Rams’ 10-and-under team has come out of the gate with guns blazing this spring, outscoring opponents 41-12 on its way to a 4-0 start. 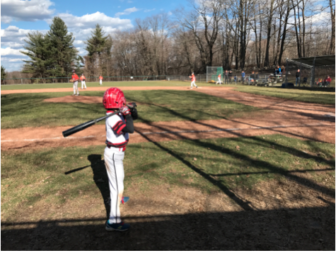 Host BVSA fared no better. The 10U Rams plated runs in each inning. BVSA finally had ducks on the pond in the final frame, but a line drive to center was met with the diving glove of Alex Werner to preserve the shutout.

Making their outdoor debut, the 10U Rams wasted no time heating up. The 1-2-3 combo of Alex Etergino, Luke Bopp and Jake Somma loaded the bases in a heartbeat, on the way to an 8-run first inning. New Canaan’s lone stretch of loose defense allowed Ridgefield to close the deficit to 8-6 in the 1st, but pitchers Roscoe, Brandon Krongard and Heagle shut out Ridgefield for the remainder of the game en route to a 12-6 win.

Pitching dominated the early in game 2, but New Canaan’s rotation of Graber, Bopp, Somma and Krongard ultimately won out again. The Rams faced their only deficit of the season, trailing 2-1 in the bottom of the 4th, when the bats exploded for 10 big runs. Werneburg and Ted Werner laced singles to kick-start the rally. Quentin Pearl, Etergino and Bopp each brought home runners with sharp singles, and Ted Werner capped a rally he started with a bases clearing double to the gap on their way to the 11-6 win.