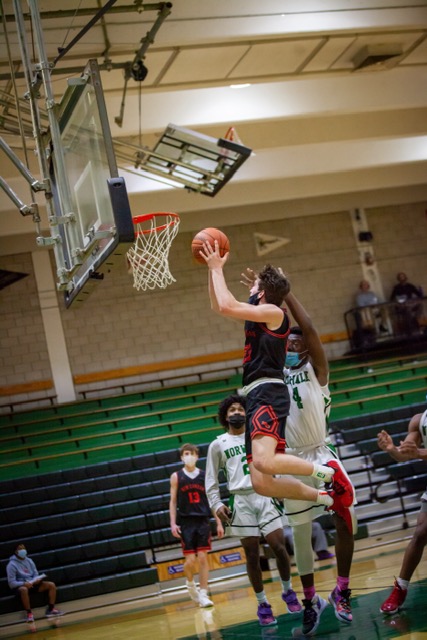 Before the 2021 season began, Danny Melzer talked about the resilience of the New Canaan boys basketball team – how even if things didn’t go their way, the Rams would somehow respond and find their way. 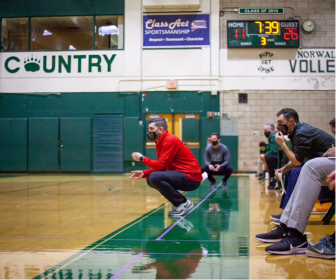 And as they have all season long, the Rams made their coach look like a prophet Monday night at Norwalk High School.

New Canaan overcame some offensive struggles and the absence of injured senior co-captain and leading scorer Leo Magnus with a stellar defensive performance, holding the Bears to just nine first half points en route to a 40-28 win.

“We made plays when we needed to and made stops when we needed to,” Melzer told NewCanaanite.com. “When you do that on the road, sometimes you have to survive and advance and that’s what we did. I was proud of that. We are leaning on our depth and that depth came through for us tonight. We did what we had to do.” 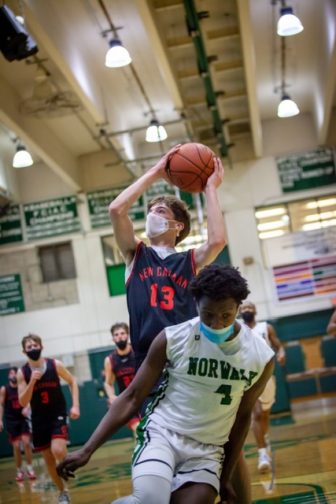 Sophomore Blake Wilson was the high man for New Canaan with 11 points. Senior Steven Panzano – playing in place of Magnus who missed Monday’s game due to a head injury suffered Friday night in a loss to Wilton—added 9 points and led the stout New Canaan defensive effort before leaving the game midway through the fourth quarter with a knee injury.

“I thought Panzano really played great for us tonight,” Melzer said. “That started Friday night. I thought he played really well against Wilton and when we found out he was starting in place of Leo, I was confident that he was going to have a good game. He picked up where he left off on Friday night. He’s a big energy guy and an important part of our zones.” 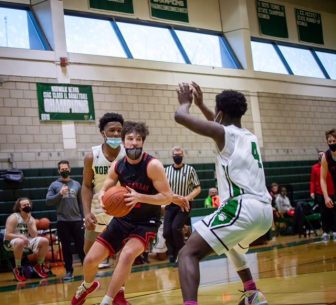 Senior co-captain Christian Sweeney scored 7 and senior Denis Mulcahy had 6 points for the Rams, who came into the game in fourth place in the FCIAC and improved to 8-2 on the season. Norwalk, led by junior Cam Edwards’ 12 points, fell to 4-6.

New Canaan’s zone forced the Bears into multiple turnovers and poor looks at the basket for most of the contest. The Rams also outhustled Norwalk on the glass, giving themselves second and even third opportunities on the offensive end, all translating to a 12-4 lead after one quarter that grew to 26-9 at the half. 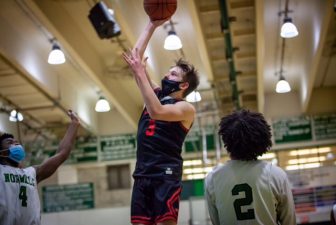 Norwalk showed signs of life in the third, holding New Canaan without a field goal for nearly six minutes while outscoring the Rams 11-7 in the period. The teams headed into the fourth quarter with New Canaan up 33-20.

After a layup from Jake Hufnagel, the Bears got to within 11 points of the Rams with 7:48 left. 20 seconds later New Canaan answered with a clutch three-pointer from Wilson that put the Rams up 36-22.

Both teams showcased solid defense the rest of the way, with the Rams never allowing their lead to shrink to single digits.

“A lot of credit goes to Norwalk,” Melzer said. “They played very hard and made us work for everything. I thought our execution was good for the most part. We had some good looks and just didn’t knock them down. That’s part of basketball. A win is a win and I’m happy with it.”