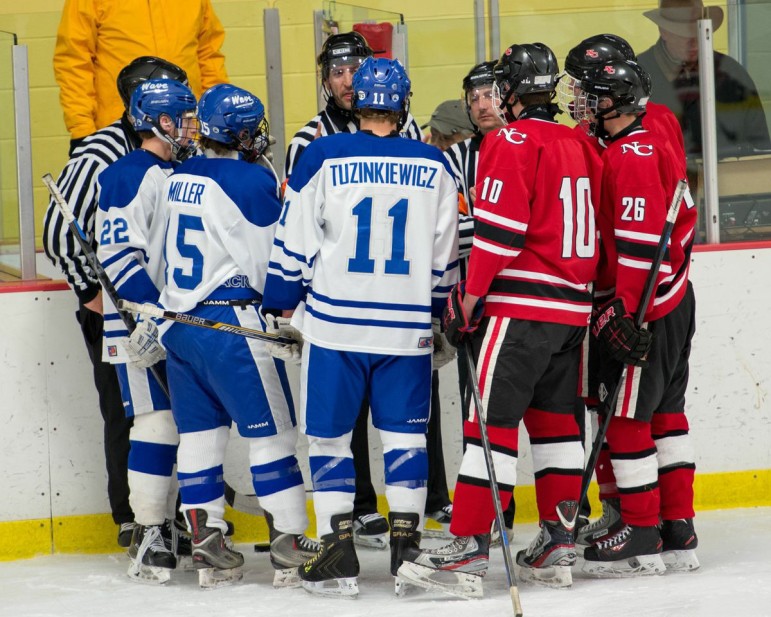 The captains meet for the start of the game. Credit: Stacy Mettler 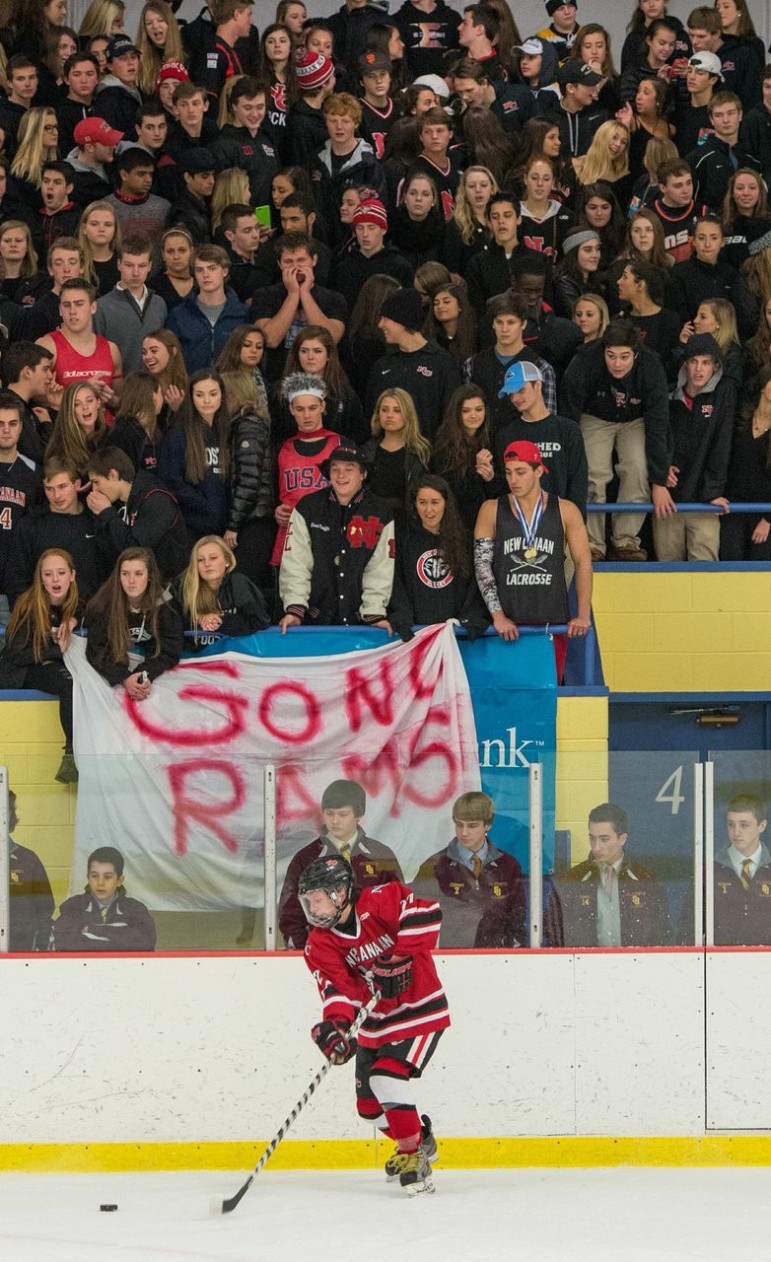 Drew Morris (#8) fights for the puck along the boards. Credit: Stacy Mettler

Tyler Hill (#7) looks for a rebound as Darien Goalie Will Massie comes up with a save. Credit: Stacy Mettler

The Blue Wave celebrate the first goal of the game. Credit: Stacy Mettler 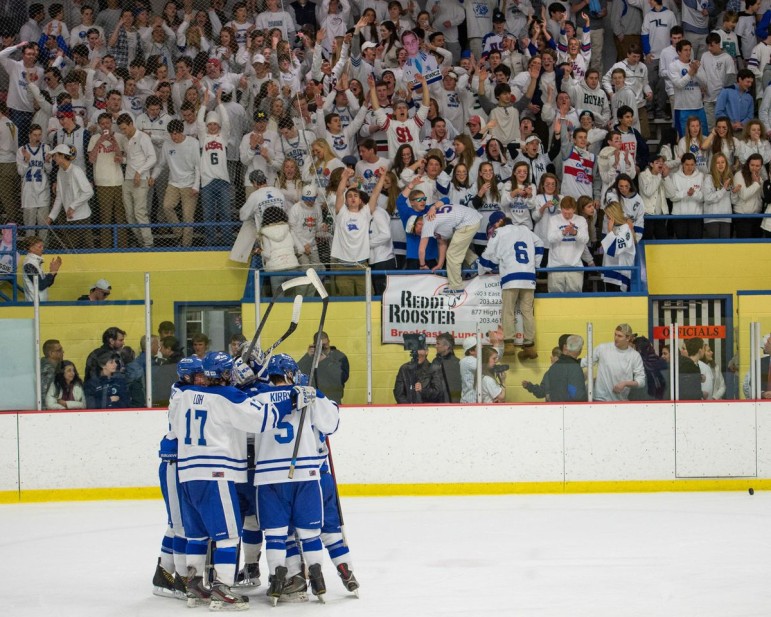 Jes Sauerhoff contributed to this report.

Max Romeyn scored a first period goal, and teammate Craig Miller added some insurance with an early score in the second period as the Darien Blue Wave shut out New Canaan 2-0 in the FCIAC semifinals Wednesday afternoon at Terry Conners Rink in Stamford.

The win was the third of the season for the Blue Wave over New Canaan and was sweet revenge for last season’s loss to the Rams in the conference championship.

“We didn’t lose this game, Darien beat us,” New Canaan head coach Pat Gore told NewCanaanite.com. “They’re very quick on the transition. They’re very good in the neutral zone, on the breakout—they’re one of the top two teams in the state and that’s for a reason.”

To their credit, the Rams—coming off a dramatic double-overtime win in the quarterfinals against Fairfield—came out strong in the opening period, outshooting the No. 2-seeded Blue Wave 8-5. Darien earned a first round bye and had not played in more than a week, and the rust showed—at least early on. The Rams maintained the majority of puck possession for the best part of the period.

A tripping penalty on Darien’s Nick Tuzinkiewicz gave New Canaan their first power play opportunity of the game. Despite several strong runs at goal, New Canaan could not find the back of the net as Darien goalie Will Massie repeatedly denied New Canaan’s scoring opportunities.

After killing New Canaan’s power play, the Wave drew first blood. Darien’s Carter Joyce skated up the right side of the ice and took a shot at New Canaan goalie Liam Mooney. Romeyn banged home the rebound for a 1-0 lead with 4:44 left in the first.

“First period we were flying,” Gore said. “We outplayed them. The only thing we didn’t do in the first was get the lead.”

Darien would quickly add to its lead in the second. A New Canaan clearing attempt was intecepted by Darien wing Jack Pardue, near the left point. Pardue sent the puck around the net to Craig Miller, who saw linemate Jake Kirby streaking down the the left side. Miller’s feed was true and Kirby beat Mooney over the right shoulder, giving the Wave a 2-0 lead just 32 seconds into the second period.

The Rams failed to answer, despite two power plays in the period. Darien almost made it 3-0 as time wound down in the second, but a point-blank Aidan Loh shot was gloved by Mooney.

Just as they had in the quarterfinals, New Canaan headed into the final period trailing 2-0. That said—Darien was not Fairfield. The Wave came out firing in the third, peppering Mooney with the first five shots of the period. The Wave controlled most of the action in the neutral zone from that point until New Canaan had yet another power play as Kirby was called for tripping with just under three minutes left. The Rams pulled Mooney to take a 6-on-4 advantage. But just 41 seconds into the penalty, New Canaan’s Drew Morris was hit with a questionable interference call.

Despite a final desperate flurry from New Canaan on the offensive end, Massie and the Wave stymied the Rams for the remainder of the game, preserving the 2-0 shutout and moving on to the FCIAC Championship game. Darien will face top-seeded Greenwich—a 5-1 winner in the other semi over St. Joe’s—for the crown on Saturday. Meanwhile the Rams will regroup and prepare for what Gore considers to be a bigger prize—the state tournament.

“At the beginning of the year we always talked about how a state tournament and a state championship is much more important in our eyes than FCIAC’s,” Gore said. “I think come next week, we’ll be ready.”