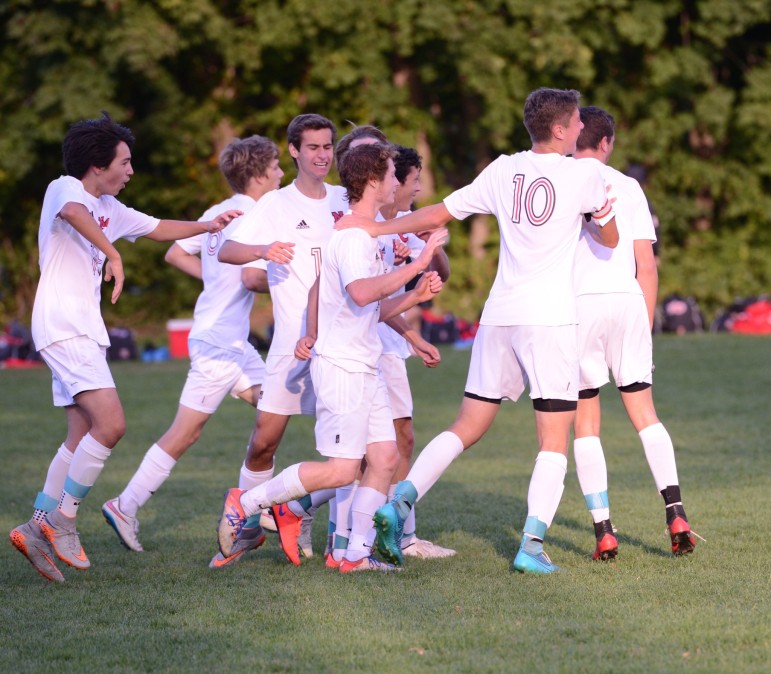 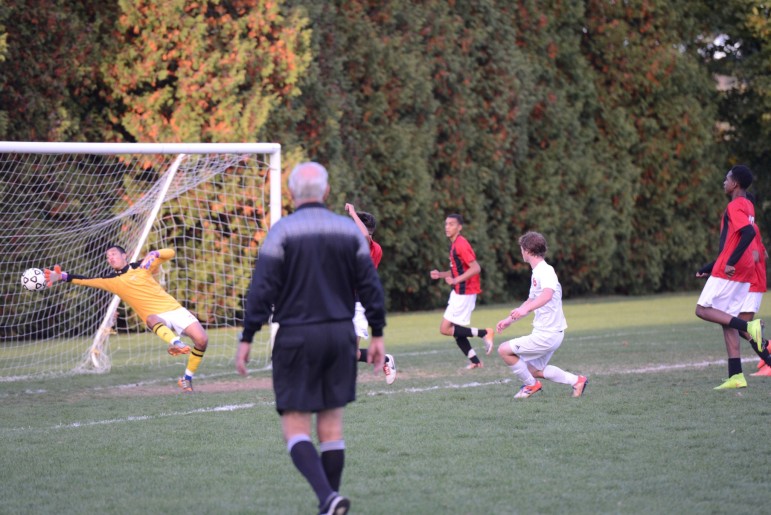 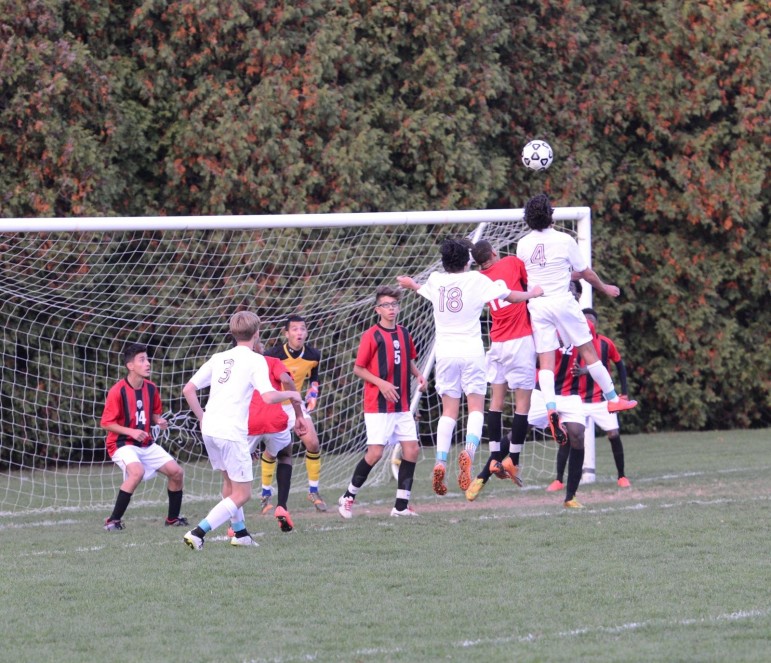 Alex Dolby (#4) going for a header to try for the go-ahead goal. His biggest play was a game-saving bicycle kick that prevented Central from taking the lead late. Credit: Christine Betack

Coming into the 2015 season, the New Canaan Boys Soccer team was a squad with only a handful or so players who were varsity-tested. Which left both the Rams coaching staff and fans intrigued to find out what type of performance the team was exactly capable of.

Through the first 12 games of the regular season, it’s been evident that the boys can certainly play defense as they had only allowed 16 goals coming into Friday afternoon’s contest against the Hilltoppers of Bridgeport Central. And stellar defense always keeps a game within reach.

So even after the Rams (3-5-5) fell behind by two goals early, efforts on the defensive end from a host of players kept the deficit there. Then a late first half goal from junior Vinny Altamura was followed by a score from senior Chris Reiss in the second half to tie Central (4-6-3) up at two, which was the final—earning a 2-2 draw and much-needed point in their fight to clinch a berth in the state tournament.

“We just started really, really slow,” head coach Rich Sutherland told NewCanaanite.com. “Didn’t really create opportunities; were quite relaxed at the back and at midfield. We allowed them to really control the game, and they did. We gave them two or three real good opportunities and they took two. So we made things difficult for ourselves which is disappointing cause it’s probably the first time that the boys have done that. We’ve been excellent up until there. But then we came back; managed to get that goal before halftime which helped us a lot because it changed the game over a bit. And then second half I thought we were the better team. But we just really didn’t get enough shots off – we created some half-chances but didn’t create enough for me to think that we deserved to win it. So the tie was probably a fair result.”

Despite New Canaan’s slow start, they did manage to keep Central off the board for the first 14 minutes of play, thwarting the couple of chances the Hilltoppers had during that span.

However, in the beginning of the fifteenth minute, Central forward Akeem Mitchell pushed the ball up the middle of the field and found his teammate Franz Muhaj on his right who finessed a shot into the top left corner of the net past New Canaan’s co-captain and goalkeeper, Griffin Paterson, for a 1-0 lead.

Exactly five minutes later, Central added another to its tally when Ryheim Hinds connected with Daigo Gardner, who was all alone in front, and Gardner tapped Hinds’ feed past Paterson and in for a two-goal lead.

Then things continued to be in Central’s favor when New Canaan senior Connor Ashley kicked put a shot towards the top left corner of Hilltopper keeper Andres Palacio’s net, only to be robbed by Palacio on a sprawling save to keep the score 2-0.

But then the Rams defense stepped up for the remainder of the half like they have all year. Whether it was Alex Dolby deflecting a shot attempt, Chris Harte winning a loose ball battle, Robbie Fusek booting a ball downfield on a clear, or Paterson laying out for a ball 25 yards in front of his net so the Central offense wouldn’t have a breakaway opportunity — everyone did their job to keep the deficit at two.

Then Brett Capone possessed the ball a little beyond midfield with just over four minutes to play in the half, who was able to find a streaking Thomas Reynolds down the right sideline and feed him for the opportunity to cross it to Altamura, who connected on Reynolds’ dish with his head for the first New Canaan goal, trimming the deficit to 2-1.

“First goal, I received the ball and saw Thomas passing me on the right side,” the senior co-captain Capone told NewCanaanite.com. “So I just tried to hold it up and kind of faked a little bit, played the ball to him [Reynolds] and luckily it got by and then Thomas played a great ball and Vinny finished. It was huge. I mean we started very slow and lackadaisically — not like we wanted to at all. The message Coach was saying was we got to start fast and we just didn’t do that. But that first goal was huge and got the momentum on our side.”

The Rams then took that momentum and ran with it coming out of the half. The possession was there’s for most of the first six minutes which frustrated Central to the point that a quite forceful push on a New Canaan attacker resulted in a yellow card. The card gave New Canaan a free kick from about 20 yards out and Capone sent the ball toward the net and connected with his classmate, Reiss, who broke through the defense and after controlling the pass, put the ball past Palacio and in to tie it at two.

“Chris Reiss worked really hard to draw the foul,” said Capone. “We then set up a play that we’ve worked on in practice. I put a good ball in and we were able to finish. He’s [Reiss] done a great job and he’s done that in back-to-back games — finished for us.”

The second goal fueled the Rams to come up with a game-winner but no offensive try would go in. Instead, it was Central who found themselves within inches of a go-ahead goal with just over fifteen minutes to play on a chance that came about when Paterson sprinted out of his net to chase another loose ball but this time couldn’t possess it when both he and Mitchell arrived at the ball simultaneously, leaving the ball high up in the air and the net vacant.

When Central possessed the ricochet, it was lofted over New Canaan defenders Alex Dolby and Robbie Fusek’s heads and heading straight for the back of the net. However, Dolby would have nothing of it as he sprinted towards the net, stood inches in front of the goal line, and then executed a perfectly-timed bicycle kick for a game-saving clear and play that had all who were at Conner Field abuzz.

“Across the board everyone worked incredibly hard,” Sutherland said. “Alex Dolby kept us in the game with his acrobatic clearance otherwise I think we might’ve lost the game cause that would’ve made it 3-2. Between all of the guys, and they always do, they all give a hundred percent and work for the cause of the team and for one another. That’s something not all teams have, and we have an abundance of, which is great.”

Added Capone of his teammate Dolby, “Alex Dolby’s save off the goal line, that was one of the best plays I’ve seen—a bicycle kick off the goal line! He’s made some great plays this year and that’s definitely up there with them and was great to watch.”

And while both teams had a couple of threats in the closing moments after Dolby’s highlight-reel save, none were as serious as the one the hard-nosed defender prevented, making the game finish knotted up, 2-2.

It was a well-desired point for the Rams as the tie now puts them within two points of clinching a berth in the state tournament—a tournament the team desperately wants to be a part of.

“Our big point was to not lose this game,” said Sutherland. “It becomes more difficult if we had. Now a win would do it [clinch states] for us. But we have games against three really, really tough teams. It’s not going to be an easy run for us by any stretch. I think the boys have done enough this season to get there – but we’re not there [states] yet so my thoughts don’t really matter. What matters is that we get it done on the pitch. So hopefully next week we can get the two points that we need and then shift our focus to the playoffs.”

The first of the three games remaining in the regular season is an away contest against Wilton on Monday. Then the Rams return to Dunning Stadium on Wednesday evening at 7 p.m. for their senior night. And conclude the regular season the following Tuesday, October 27, at Greenwich.