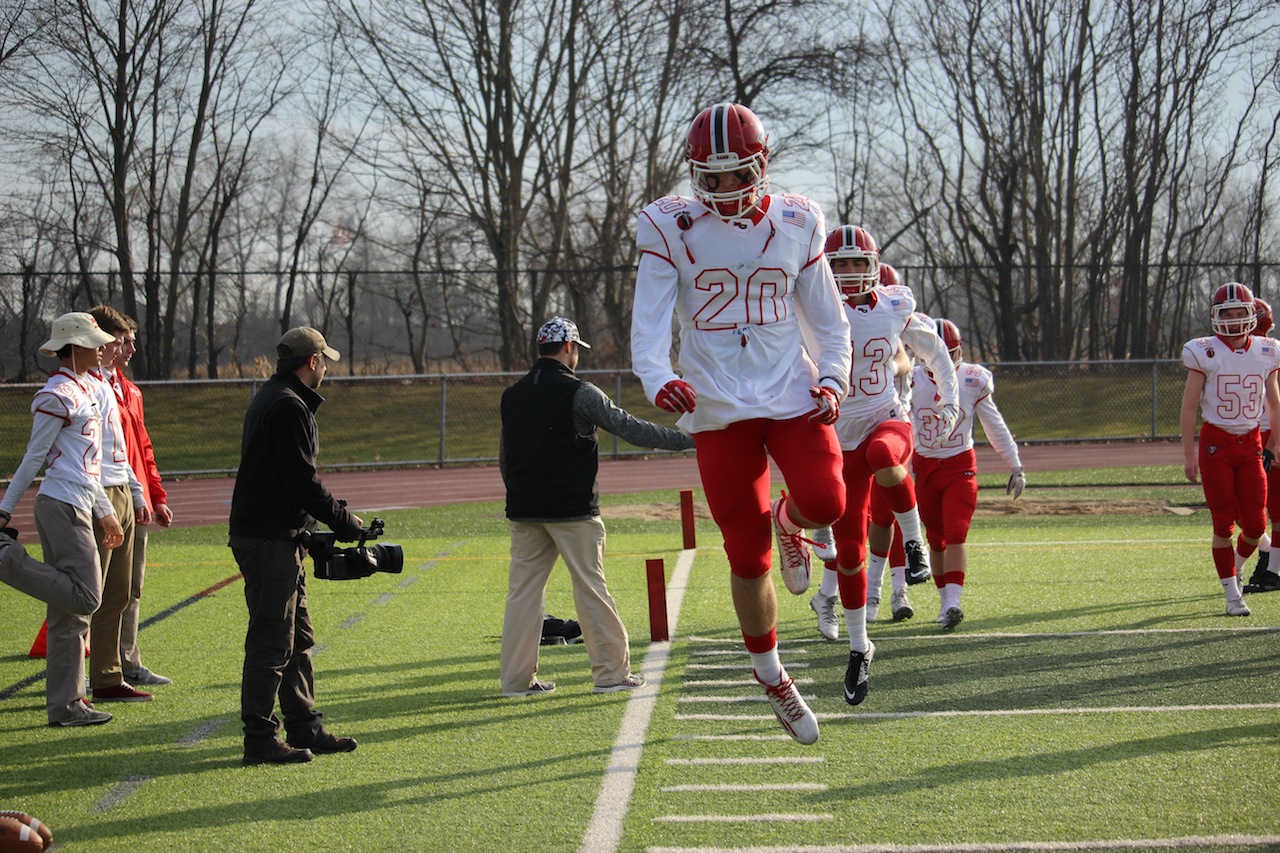 It was billed as a matchup of two heavyweights with polar opposite styles—the 21st century run-and-gun spread offense of the No. 6 New Canaan Rams versus the old-school ground-and-pound, Single-wing formation of the top-seeded North Haven Indians.

It turned out to be North Haven’s passing that kept the game close, but it was New Canaan’s ground attack that ultimately won it.

Led by senior running back Matt Cognetta’s 225 rushing yards and two touchdowns, the Rams outlasted the Indians 42-35 in a classic Class L championship showdown at Ken Strong Stadium in West Haven—one that had just about everything and anything you could have asked for from a high school football game.

“It was a great football game to be at,” Marinelli told NewCanaanite.com. “It was a shame that anybody had to lose. You can’t ask for any more heart than what you saw out of two teams tonight.”

For Marinelli, the win was career number 300 in his 35 years as head coach of the New Canaan Rams and his third consecutive state championship. It was also the 11th state title of his storied career. Number 300 did not come easy, as North Haven (12-1) hung toe-to-toe with the Rams (11-1), utilizing a surprising passing attack which out-gained New Canaan 202-179 in total passing yardage.

The Indians fought back from deficits of 21-7 and 28-14 to tie the game at 28 and again at 35, before New Canaan scored the eventual game-winner after a remarkable 72-yard drive that saw the Rams run the ball 14 times in 15 plays. New Canaan converted three third downs along the way, eating up more than six minutes of game clock before junior Ryan O’Connell leaped over the goal line from a yard out to cap off the drive.

“They were dropping eight guys in coverage and we had five linemen on four defenders—it was just easy math,” senior quarterback Michael Collins said. The Rams record-setting signal caller finished the game completing 22 of 28 passes for 179 yards and a touchdown. “We killed them with run game.”

After forcing a North Haven punt on the game’s opening drive, the Rams went right to work. On New Canaan’s second offensive play from scrimmage, Cognetta ran virtually untouched up the middle en route to a 53-yard score, giving the Rams a quick 7-0 lead than 3 minutes into the game.

Following a missed a 45-yard field goal on New Canaan’s next possession, the Indians—a team that entered Saturday’s contest having thrown just 81 passes all season—began to pass the ball, and did so successfully. A pass interference call and a 20-yard completion on third-and-5 from Jack Steinman to Jeremy Imperati set North Haven up at the Rams 23. Mike Montano then hit a wide-open Nick Ponzio for a 23-yard touchdown, knotting the game at 7 with 1:12 left in the first.

The Rams answered immediately as runs of 49 and 15 yards by Matt and Mike Cognetta set up a two-yard scoring run by O’Connell, as the Rams regained the lead 14-7 on the last play of the quarter.

The Rams extended that lead on their next drive, marching 46 yards on six plays. Collins hit Kyle Smith over the middle on a nine-yard strike to give the Rams a 21-7 advantage with 8:46 to play in the half.

North Haven then countered with a long scoring drive of its own, mixing runs and passes over 12 plays covering 80 yards. Mike Montano finished it off with a six yard run, cutting New Canaan’s lead to 21-14 with 5:30 left in the half. New Canaan also suffered a big loss on the drive as senior linebacker Thomas Williams was carted off the field with what was reported to be a broken ankle.

“It threw our defense totally off,” Marinelli said. “But [defensive coordinator] Chris Silvestri calmed everybody down and made the adjustments.”

Despite the apparent swing in momentum, New Canaan’s offense hit back yet again. A huge 31-yard Collins to Smith completion on third-and-6 set the Rams up at the North Haven 1. Matt Cognetta took it in one play later, giving New Canaan a 28-14 lead with 3:05 to go before the intermission.

North Haven—as they would all game long—refused to go away. Swapping out Steinman and Montano under center, the Indians gained consistent yardage through the air, ultimately scoring on a 36-yard pass from Steinman to Ponzio to pull to within 28-21 just before the half.

After forcing a New Canaan punt on the first series of the second half, North Haven evened the score. A 29-yard run around the right end from Montano capped off an eight-play, 82-yard drive to make it 28-28 with 6:21 left in the third.

That’s when the Rams started to beat the Indians at their own game.

Starting at their own 20, the Rams turned to Matt Cognetta. Just one game removed from what looked to be a serious shoulder injury in the quarterfinals against Windsor, Cognetta ran nine times for 39 yards, converting two of New Canaan’s three third downs on the drive, which lasted more than 5 minutes. Senior co-captain Mike Cognetta finished the drive with a three-yard touchdown run, giving the Rams a 35-28 lead with 1:12 left in the third.

“Matt still had a lingering injury with his shoulder,” Mike Cognetta said. “He powered through and toughed it out.”

North Haven made one final stand, tying the game once more with an 11-play, 65-yard series. Montano got his third rushing touchdown of the game with a leaping six-yard score to make it 35-all with 9:45 left in the game, setting up the eventual championship-winning drive for the Rams.

Matt Cognetta did most of the heavy lifting again for the Rams on their final offensive series, carrying the ball six times for 39 yards behind solid blocking from the offensive line of senior co-captain Gardner Read, Lucas Niang, Will Conley, Jake O’Neill and Teddy Hood. Collins also did what he needed to with his legs, picking up a key first down on third-and-5 from the New Canaan 46. After Cognetta got the ball to the goal line on a nine-yard carry, O’Connell went airborne on second-and-goal to give New Canaan a 42-35 lead with 3:34 left to play.

North Haven had one final chance. After starting at their own 20, the Indians converted a heart-stopping third down as Steinman managed to find a well-covered Ponzio for 13 yards. Four plays later, running back Conner Suraci picked up 2 yards on fourth-and-1 at the North Haven 42, keeping the Indians hopes alive. Three consecutive incompletions would force North Haven to a fourth-and-10, and when Steinman’s pass floated into the waiting arms of New Canaan defensive back Andrew DeFranco, the championship belonged to the Rams.

“We couldn’t be happier,” Matt Cognetta said. “We wanted to leave it all on the field, and we did that pretty well.”

“It still hasn’t really set in,” Collins said. “It’s a great feeling to get three in a row like that and against a tough North Haven team—give credit to them. They fighting back and fighting back. We pulled it out in the end. It’s just awesome.”

For Lou Marinelli, who over the course of his 300 wins at New Canaan has seen some of his greatest victories come at Ken Strong Stadium—including the 1993 and 2014 state championship games—the thrill of every season-ending title comes with a small measure of melancholy.

“For me it’s always bittersweet,” Marinelli said. “These guys are going to be gone, this family will be broken up and on Monday we have to start all over again. How about the Cognetta’s today? Two kids that probably shouldn’t have been playing because they were so banged up. Lucas Niang running people down at 310 pounds. Just to watch the way the kids fought…they did a tremendous job.”