Ty Tan, a professional landscape designer from West Norwalk, joined the New Canaan Beautification League about 18 months ago, after attending one of its free monthly programs. 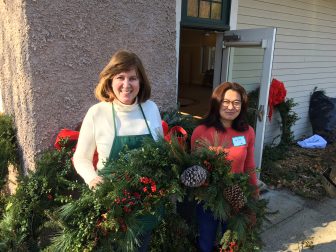 This week, she is serving as the league’s coordinator on joint effort with the New Canaan Garden Club to beautify and prepare the town for the holidays.

The two nonprofit organizations for more than a half-century have marshaled their considerable forces together to create huge wreaths and other holiday decorations that adorn Town Hall, the Post Office, New Canaan Library, Train Station, God’s Acre bandstand and New Canaan Nature Center as well as Meals-on-Wheels trays. 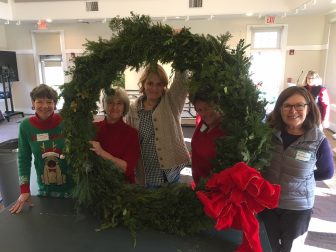 “I think it really makes the town small and beautiful and unique and more personal, as opposed to going to other towns that do not feel personal,” Tan said on Tuesday afternoon as League and Club members placed finished wreaths on the back of pickup trucks for transporting to their destinations. “It really adds that small town touch.”

The New Canaan Department of Public Works assists in the efforts, hanging the wreaths and supplementing the raw materials that League and Club members gather from their own gardens with those the town workers get from public properties. 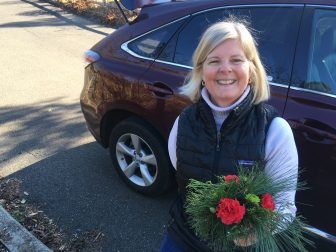 Catharine Sturgess of New Canaan shows one of the vases that will be delivered with Meals-on-Wheels meals this week, thanks to the joint effort of the New Canaan Garden Club and New Canaan Beautification League. Credit: Michael Dinan

Maryjane Markey, a 25-year town resident who had been a League member and has been a member of the Garden Club for 17 years—this year, chairing the Club’s Holiday Greens Committee—said she was “amazed” on arriving in New Canaan “that our town looked so gorgeous” during the holidays.

“And women contributed and created it, and it was not taxpayer dollars—love that,” Markey said.