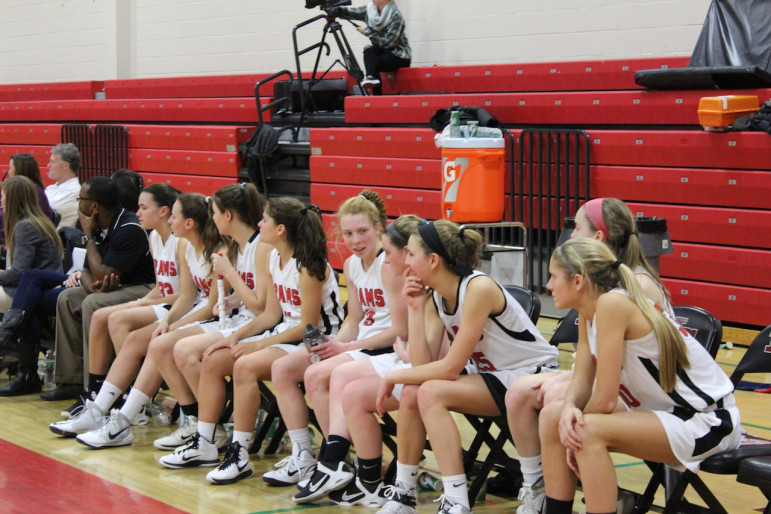 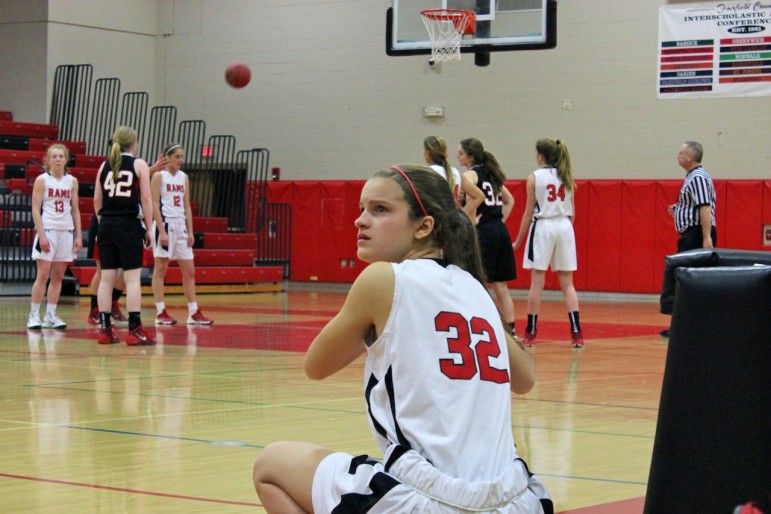 Katie DeMarino gives it her all. Credit: Terry Dinan 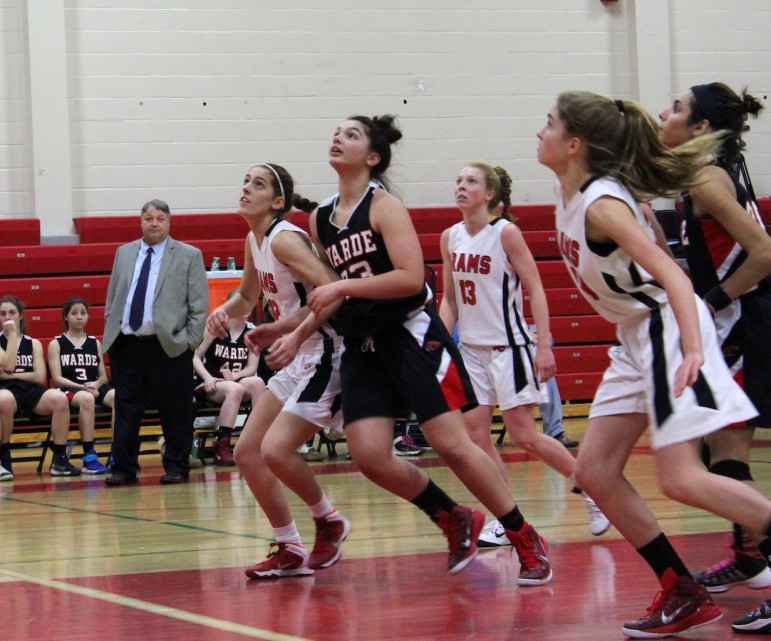 Thirty point losses usually don’t elicit much optimism, but for New Canaan girls basketball head coach Kim Palmer, there were many positives to be taken from the Rams’ 64-34 loss to Warde on Friday night.

The Rams had a tough time stopping Warde center Shania Osborne who led all scorers with 23 points. Sarah Cotto came off the bench to score 13 for the Mustangs who improved to 11-0 overall and sit atop the FCIAC at 9-0 in conference play. New Canaan fell to 4-6 overall and 3-4 in the FCIAC, good for 12th place in the conference standings.

The Rams were led by senior captain Elizabeth Miller, who scored 10 points with 6 rebounds and 5 assists in a losing effort. Junior Katie DeMarino scored 6 points for New Canaan and sophomore Campbell Armstrong added 4 points and a team-high 6 rebounds.

The Rams fell behind early as Warde scored the first 6 points of the game. DeMarino got New Canaan on the board with 4:46 left in the first quarter, and brought the Rams to within 7-4 after hitting a baseline jumper a minute later. Warde was able to reel off a 9-2 run before Miller scored the final basket of the quarter to make it 16-8 Mustangs after 1.

The Mustangs would pull away in the second quarter, as they began to press New Canaan’s offense, leading to several turnovers and breakaway layups. Baskets by DeMarino, Kylie Murphy and Marina Braccio were not enough to counter the Mustang’s offensive output, as Warde built a 32-14 halftime lead.

New Canaan came out strong after the intermission, as consecutive baskets from Murphy and Armstrong pulled the Rams to 32-19. Warde then went on another run, scoring the next 9 points to extend to a 41-19 lead that grew to 47-23 by the end of the quarter.

New Canaan was able to hang with Warde in the 4th quarter as Miller drained two 3-pointers and Olivia Hunsinger added another from beyond the arc. After the Rams landed in the penalty, the Mustangs were able to hit the majority of their free throws down the stretch as they cruised to the win.

“I’m really proud of the way they played,” Palmer said. “I think if we can continue to play the way we did tonight and continue to get better, we’re going to get some more wins this year.”

New Canaan will face another tough test on Tuesday when they play 7-2 Ridgefield at home. Tipoff is at 7pm.