Faced with new standardized testing that they say is burdensome, in many cases inconsequential and raises concerns about privacy and data-tracking, some New Canaan parents have said they’ll pull their kids out of school to avoid it—a move whose consequences remain unclear, a local expert says.

The Smarter Balanced Assessment Consortium field test is being administered now in waves, in grades three through eight and also grade 11 (the “SBAC,” as it’s called, also is designed to check for college and career readiness).

The state has said districts must get 95 percent student participation, and local school officials are pushing that information down to parents, though neither has said what the repercussions will be if all of those kids do not show up, according to Kate Guthrie, director of academic services with the New Canaan office of Greenwich Education Group. The company’s services include tutoring, standardized test prep, day and boarding school advice and college counseling.

“Grade 11 is currently the most contentious piece of this, because there are also the SATs and the ACTs and a number of other standardized tests to contend with,” Guthrie said. 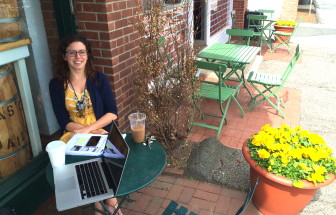 Kate Guthrie, director of academic services of grades 9-12 for the New Canaan location of the Greenwich Education Group, discussing the SBAC test at Zumbach's on Pine Street.

“My biggest concern is the eleventh-graders and their anxiety. And I would really stress that this test means absolutely nothing for them. They should consider it as they’re pioneering a new step in the education system. They’re going to be the first people to experience it and they should lose no sleep over this, whatsoever.”

SBAC is charged with creating tests by next year that align with the Common Core—a new set of standards in math and English designed to yield apples-to-apples comparisons in student achievement and teaching performance across states and districts. Its motto is “Preparing America’s Students for College & Career.”

Forty-four states have adopted Common Core. Half of those are participating in the field test, including Connecticut. None of our neighboring states are involved. The SBAC says on its website that more than 3 million U.S. students are undergoing the field test (you can take a sample test here).

“Most students will complete a test in one subject: either English language arts/literacy or mathematics,” SBAC said on its website. “While the Smarter Balanced assessment is untimed, each subject area is expected to take 2.5 to 4 hours to complete. Schools may administer the Field Test over multiple days. Because questions may be revised or dropped after the Field Test, students will not receive scores.”

That has emerged as a problem for many New Canaan parents—not just that they won’t get any information on how their own kids performed, but because there’s scarce information on just who will see results, Guthrie said.

“It’s an issue with a lot of people as to how the online data will be used. because the test will be taken entirely online,” Guthrie said. “They have not really set down how that data is going to be used. So I don’t know if it will be federally available, state available, or where the data will go. Even the schoolteachers I have talked to do not know. They know the parents will not get it and they will not see it.”

Meanwhile, parents of our NCHS juniors especially are agitated, since those students won’t even be involved in SBAC testing once the state receives the results of this year’s tests and makes whatever adjustments it needs for future years.

“They’re saying, ‘Well, my kid isn’t going to see the implementations of this come 2015-16, so why don’t I just opt them out?’ ” Guthrie told NewCanaanite.com.

The district has stressed with parents that testing is required. A March 11 letter to parents of Saxe Middle School students said: “Testing is required by state mandate in grades 3-8 and the high school (in this case grade 11). Additionally, privacy and confidentiality protocols continue to be in place at district and state as in past.”

The following day, South School sent an email to parents saying that kids who miss the SBAC on the first go-round will be administered the test later: “Similar to the past, if children are absent, make-up sessions will be available. Since the State and districts remain accountable for achieving a federally established guideline of 95% participation, we ask that you take steps to ensure your child is present and on time for the assessment. Should your child be ill, make -up sessions will be available.”

Guthrie said that for grades three through eight, she would stress that the test is “working toward the benefit and efficacy of the educational system.”

“We need a field test in order to provide proper measurements in the future, because the core curriculum is relatively new, and they want to do this right. It’s almost like a crash course, this test will count for nothing, the results will not go anywhere. If anything it will provide them with a bit of familiarity when they take it next year.”