New Canaan Library now has projections of how much money might be raised for its widely anticipated building project—a figure that will be lined up with the high-level architectural renderings that the library already has to help decide what a rebuilt facility may look like, officials say. 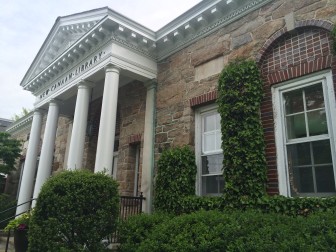 Asked for an approximate timetable for next steps, Director Lisa Oldham said the library expects to have preliminary site plans to share with the community by the end of June 2015.

“We now need to take those two pieces of information [conceptual renderings and recently completed feasibility study], go back to the drawing board and see where they meet in the middle,” Oldham said.

Guiding principles of the project include sensitivity to the community’s clearly expressed desire to preserve the original stone façade and pillars that face Main Street, as well as considerations such as space use and flexibility, she said.

“The structure of this building does not enhance our ability to do our jobs,” Oldham said.

“Modern libraries are all about open, flexible spaces with flexible stacks and flexible furniture, so that as users’ needs change, we can change to accommodate them. So for example, currently in the children’s department we have about 50 percent of the square footage that we need to deliver what we are trying to deliver to the children of New Canaan. The collection itself is compressed into half the size that it really needs.”

The architectural renderings are themselves based on several months of workshops that included various members of the community, Oldham said.

“I think the really important piece about the high-level concept drawings is that they were a result of a community workshop,” Oldham said. “It wasn’t just library board and library staff. The vast majority was from the community.”