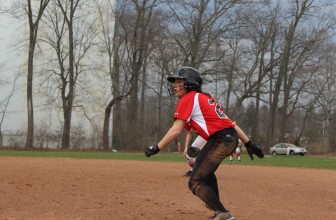 Freshman Molly Keshin hit her second home run of the season and drove in three runs to lead the New Canaan Rams softball team to an 11-4 drubbing of Wilton High School. New Canaan also received a solid pitching performance from junior Jamie Schlim, who settled down after a shaky first inning to shut down the Warriors. Schlim struck out 9 batters while giving up 4 hits and 4 walks to earn the complete game victory for the visiting Rams.

The win was the first of the season for the defending FCIAC champs, who came into this afternoon’s action having dropped their first 3 games of the season.

“I’m very proud of how they stayed focused the entire game,” New Canaan head coach Danielle Simoneau said. “They adjusted at the plate when they needed to and made all the plays they needed to.”

New Canaan jumped out to a quick start. With one out in the top of the first and runners on first and second, senior captain Ali Reilly singled home fellow senior captain Colette Pellegrini for the Rams’ first run. After scoring their second run on an error, senior captain Rachel Kortman dropped a base hit into centerfield, scoring Reilly and giving New Canaan a 3-0 lead.

Wilton fought back in the bottom of the first, tying the game with 3 runs of their own, as 3 walks, a hit and an error helped the Warriors get right back into it.

The game remained deadlocked until the top of the 4th, when Molly Rochlin was hit by a pitch to lead off the inning. Freshman Sophia Welch singled to left, followed by a one-out infield hit by Pellegrini to load the bases. With two outs, Wilton starter Sage Zunda walked Reilly to force in a run and the Rams had a 4-3 lead. 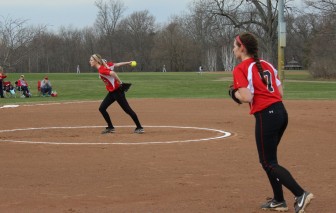 Jamie Schlim in the circle with Ali Reilly at 1B.

New Canaan broke the game open with a huge two-out rally in the 5th. Sophomore Claire Conley ripped a triple to lead off the inning, and scored with one out on Rochlin’s grounder to short to extend the New Canaan lead to 5-3. With two outs freshman Rachel Keshin reached on an infield hit and moved to third on Pellegrini’s RBI single up the middle that made it 6-3 New Canaan. Molly Keshin then drove a long 3-run homer down the LF line to give the Rams a 9-3 lead.

“I really wanted to get a good hit off (Zunda) because we knew her,” Keshin said. “I wasn’t really thinking about the distance, I just wanted to hit it hard.”

The hit parade wasn’t over yet. 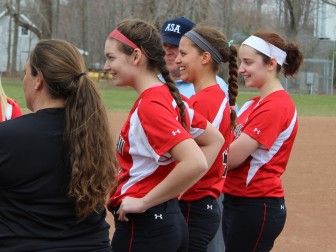 After Reilly singled, Schlim hit an RBI triple and scored on Conley’s grounder to shortstop. When the smoke finally cleared, New Canaan had an 11-3 lead.

Wilton plated a run in the bottom of the 6th and had two runners on in the 7th, but Schlim retired the Warriors’ Nicole Amato on a grounder to short to end the game.

“Now that we have the first win, I just feel like they are going to keep on coming,” Keshin said. “Today we had a talk with the captains before the game. They pumped us up, and we were ready to win.”