After more than a decade of false starts, legal wrangles, lapsed approvals and countless volunteer hours dedicated to the effort, a new cell tower finally will go up in eastern New Canaan.

Silvermine is one area of town (there are others, yet without a firm plan for acquiring service) that long has endured a spotty cell signal—a  shortcoming that affects not only quality of life and real estate values, advocates say, but most importantly, public safety. 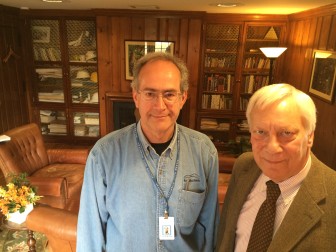 Construction of the monopole-style tower on a wooded ridge at Silver Hill Hospital’s campus is due to start this week under the supervision of Phoenix Partners LLC, according to the staff at the Valley Road psychiatric facility.

“We’re very happy to be able to do this as an accommodation to the town,” Silver Hill President and Medical Director Dr. Sigurd Ackerman told NewCanaanite.com Monday. “From that point of view, it’s a very good thing.”

It isn’t clear just when service will be available. After the tower itself is up, carriers will need to build cabinets to get their own antennas and equipment inside the tower (there will be no external antennas).

Two carriers expected to set up for sure, Ackerman said, are AT&T and Verizon, while a third could include T-Mobile or Sprint.

New Canaan Fire Marshal Fred Baker said the town’s emergency management is “thrilled” that the cell tower is going up.

“his will provide cell service to an area that has long been a ‘dead zone’ for residents and travelers,” Baker said.

Ackerman, who has been in his role at Silver Hill for just over a decade, said discussions about cell towers have been ongoing for his entire tenure.

Early on, around 2003, one plan to install a cell tower in the Norwalk Taxing District at the water treatment plant drew criticism and legal action from neighbors who quashed it, Ackerman said.

“When I got here in the fall of 2013, Dick Bond, then first selectman, and a number of others from the town, came here to ask me if the hospital would consider it because they felt that if it [a cell tower] were placed on hospital property it would be better for the neighbors and just as good for the town—in other words, the town would have cell service in this area and the neighbors who objected to the water treatment site wouldn’t object to a site on Silver Hill property,” Ackerman recalled.

An agreement was reached, and approvals were garnered from the Connecticut Siting Council, yet T-Mobile repeatedly was unable to put a shovel in the ground. T-Mobile a few months ago sold the rights of its current lease for putting up the cell tower to Phoenix Partners LLC, Ackerman said.

Frank Morabito, longtime head of facilities at Silver Hill—see video above—met with the construction company Thursday as they staked out the site.

Other areas of town where cell service is needed include Ponus Ridge and Smith Ridge up toward Vista, NY, officials say. Efforts to erect cell towers in areas that include Route 123 by Country Club Road, West School and First Presbyterian Church have been thwarted in recent years.

Town officials recently have looked at Norwalk Armory and the Transfer Station back behind Lakeview Cemetery as possibilities, too. At one recent meeting of the Utilities Commission, members said the town would undergo a test that involved a vehicle traveling town roads to determine levels of cell phone service here already.