Though Marna Altman for eight years had been caring for kids professionally as a preschool teacher, she’d never cooked for others until she had her own children.

Originally from Scarsdale, NY, Altman moved up to Westport for her husband’s job a few years ago and—while staying home to raise their two young kids—developed a passion for keeping the children’s diets chemical-free.

The baby food Altman found in most markets weren’t living up to her own standards, so she started shopping farmers markets and making it herself.

“And from that experience we had a lot of friends and family who were really interested with us supplying them with baby food and making it for them, and then it kind of just became a business from there,” recalled Altman, 32, CEO of Garden Baby Fresh LLC.

In just one year, the company has grown its locally sourced, all-organic baby food and toddler meals business—with repeat customers and even out-of-state mail orders—to the point where Altman can start to envision a national presence.

“It’s the kind of thing where, even if someone doesn’t have a baby, they say, ‘Wow that’s such a good idea,’ ” Altman said. “And it’s very affirming for me, because it was just this little idea in my kitchen not that long ago, and we were going to give it a one-year trial.” 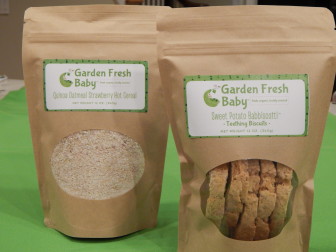 Here are two Garden Fresh Baby products that will be available at the Mrs. Green's opening Friday in New Canaan. Contributed photo

On Friday, Garden Fresh Baby’s hot cereals, teething biscuits and our biscotti will be sold at Mrs. Green’s in New Canaan. Mrs. Green’s, whose Stamford and Wilton locations are known to many New Canaanites, on Monday announced its widely anticipated launch with a Thursday open house that’s open to the public (5:30 to 8 p.m., RSVP here).

Garden Fresh Baby was scouted by Mrs. Green’s at one of the many farmers markets Altman attended to get the word out about her food. She’ll be set up at the “end cap” or top of an aisle in the new Mrs. Green’s, located in the building at the corner of Park and Pine Streets, long home to our local post office. 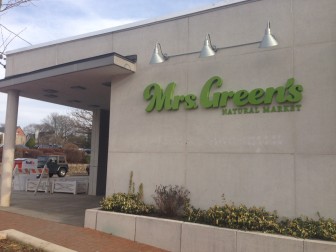 Asked to describe the importance of getting her trial with Mrs. Green’s (if it goes well, Garden Fresh Baby may get an opportunity to sell in multiple stores in Connecticut), Altman said: “It’s a big deal. Everybody hopes to end up in a store like Mrs. Green’s, especially because they’re expanding right now and they love local vendors. So it’s the perfect place for a vendor like myself.”

It’s also a strong measure of local interest in nutrition that Mrs. Green’s feels the town can support its new store, said New Canaan mom Cobie Graber, founder of Nourish New Canaan. The organization, whose mission is to make it easier for busy families to choose a healthy lifestyle, was instrumental in creating a wellness policy for New Canaan Public Schools.

“Our sport-oriented village is becoming a lot more focused on nutrition. It is a great sign that a chain like Mrs. Green’s, which does extensive demographic research, feels that our town can support a store in addition to Walter Stewart’s and New Canaan Healthfare,” Graber said.

“In spite of busy schedules, more families are cooking at home. That’s why these stores as well as meal plans by Meals in a Snap, meal delivery service from FreshDine and food preparation and delivery by Graze Delivered are thriving.”

Mrs. Green’s in a press release said 5 percent of proceeds during the store’s opening weekend will go to the New Canaan Nature Center.

Here’s part of a statement issued in the release, from Mrs. Green’s CEO Robin S. Michel: “With Easter and Earth Day right around the corner, this is the perfect time to open our newest store. We’re excited to bring good, local and environmentally responsible food to the citizens of New Canaan.”

Those citizens became known to Altman during the Winter Farmers Market up at the nature center, and she said she hopes to get Garden Fresh Baby into the Summer Farmers Market in the Center School lot (the season launches May 11).

Altman uses a farm in New Britain (those are some of the photos interspersed throughout this article) and what’s unique about her food, she said, is that “everything is sourced as locally as possible.”

Mrs. Green’s at 7:45 a.m. on Friday will hold an official ribbon-cutting ceremony at its 2 Pine St. location with the New Canaan Chamber of Commerce.