The town on Monday received a lawsuit filed on behalf of a local woman who last spring fell outside New Canaan High School and broke her nose.

It happened at about 6:45 p.m. on a Thursday in April 2017, outside the high school’s main entrance, according to a lawsuit filed by Lawrence F. Reilly of the Ridgefield-based Reilly Law Firm. 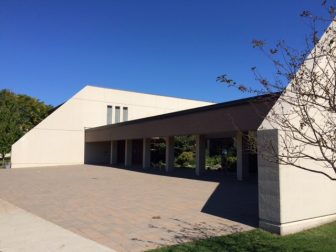 The fall happened roughly in the area shown in the foreground of this photo, according to the lawsuit. Credit: Michael Dinan

Joan Holloway tripped on a protruding, bent, defective and uneven piece of metal rebar where a paved walkway meets the grass on the southern end of the main entrance, according to the lawsuit, filed in state Superior Court.

“As Ms. Holloway fell to the ground, she was unable to brace herself and her face slammed into the paving stones covering the entranceway to the High School, thus causing injuries and losses described herein,” the complaint said.

Those include “massive bruising above and around her left eye” so that it was swollen shut for a time, “abrasions, scarring, severe bruising and discoloration throughout her face,” contusions and swelling of her left knee and “ongoing tenderness of her injured body parts,” according to the lawsuit.

Holloway additionally has had “pain, suffering, embarrassment and humiliation” and a “severe shock to her nervous system.”

The lawsuit seeks more than $15,000, compensatory damages, costs and interest and “such the relief at law or equity as the court deems just and fair.”

The town, Board of Education and high school principal each are named as defendants.

The lawsuit accuses them variously of negligence and breach of statutory duty, in allowing the school grounds to remain “dangerous and unsafe” or from warning pedestrians about the “tripping hazard.”