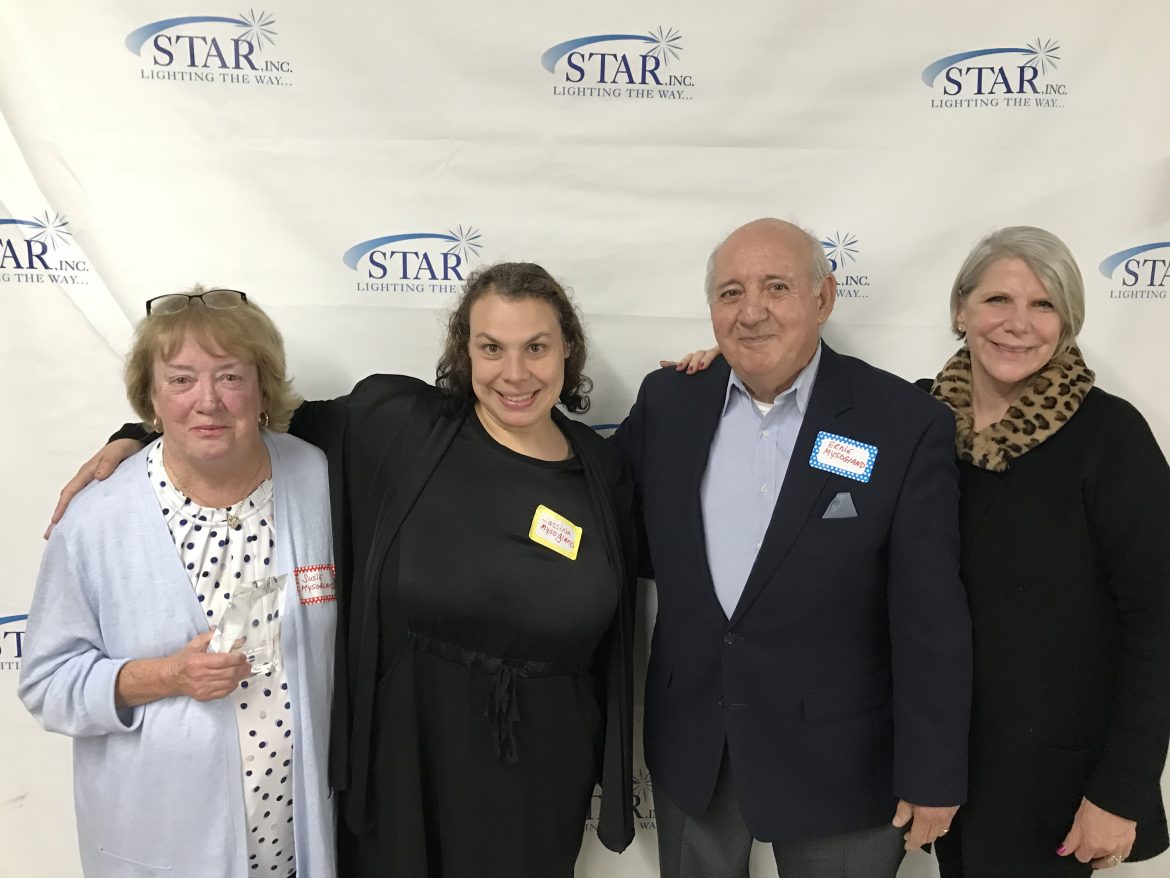 New Canaan’s Ernie Mysogland describes his adult special needs daughter Jassinia as “a true sweetheart” who models his wife of 50-plus years, Susie, in her kindness.

For more than 20 years, Jassinia through an area nonprofit organization with deep ties to New Canaan has worked as a bagger at the Food Emporium on Elm Street, now Acme.

Because the Mysoglands had such a large family—11 kids—and Jassinia’s brothers and sisters brought home so many friends, she came to know all kinds of people, according to her dad.

“Those people got the idea that if Jassinia was going to work at the grocery store and she was going to bag groceries, they would try to get in her lane,” Ernie Mysogland recalled Monday night, standing near his wife and daughter and addressing more than 100 STAR Inc. staff members, clients and families gathered at the organization’s Norwalk headquarters for its 67th annual meeting.

“And they would say, ‘Hi Jassinia,’ and she would say, ‘Hi, how are you?’ And Jassinia, unfortunately, would let a lot of family secrets out. People would say, ‘Jassinia, how are you? How is everybody?’ One time she said, ‘Oh, Joey is in real big trouble—he got home late and my dad was so mad, he’s grounded for two weeks.’ One day, we get Jassinia bagging groceries and because she is such a friendly, loving person, you can sometimes—as we all know—some of our dearest people in need have not been fully respected. I want to tell this story because things go around. Jassinia is bagging groceries and this heavyset lady, very nicely dressed, comes through with a huge amount of food. And Jassinia sees a bag and says, ‘Oh apples. Apples are very good for you.’ And she commented that she would look up and this lady would not engage in any conversation with Jassinia. Undaunted, she continued, ‘Oh a lot of steaks. I like steak.’ And then, ’My brothers, they love potato chips.’ And she’s looking for a response. This lady is not about to respond. She continues, she says, ‘Oh a chocolate cake. Oh I like chocolate cake. And it’s a big one.’ And the lady certainly doesn’t want to talk about her chocolate cake. Jassinia says, ‘Did you finish the one you bought yesterday?’ ”

The room erupted in laughter at the anecdote—one highlight in a fun-filled two-hour event that included live music, videos spotlighting STAR’s highly regarded programs for developmentally disabled people and their families, including employment services, an awards ceremony (see full list of winners below) and the business meeting itself, which saw New Canaan’s Meghan Cioffi elected to the position of Board of Directors president and town resident and former First Selectman Rob Mallozzi nominated and also voted onto the Board.

Susie and Ernie Mysogland earned STAR’s Anne O’Callaghan Parent of the Year Award. In presenting the honor to the Mysoglands, STAR Director of Residential Services Cheryl Bergstrom, who in her role oversees 98 residents in 14 group homes and apartments, said Ernie and Susie are not only wonderful parents to their own children, but always make themselves available to help other STAR parents.

“When we have other parents who are need,” Bergstrom said, motioning as if to pick speak on a phone, “it’s, ‘Hi Susie, hi Ernie—can you give us a hand? This parent could really use a parent with experience.’ And that’s who we call and we are so thankful. And not only the small groups but the big groups. If we need them for our luncheon, when we need people that have a story to tell, we always think of the Mysoglands. And the last thing is, they’re humble. They say, ‘Oh no, we don’t deserve it.’ If anybody deserves it, it’s Ernie and Susie Mysogland.”

In accepting the award, Susie Mysogland said, “We really don’t deserve it more than anyone else.”

“So many families and stars are in STAR, you all know that,” she said. “So on behalf of all of you, we accept this award, thank you.”

“We support you and your organization, and your mission,” Rilling said during brief remarks. “The work that you do is amazing. I can’t begin to express how you add to this community and those that you help. You help parents, you help family members.”

Cioffi said she’s been involved with STAR for 20 years, since she and her husband learned that their daughter, Molly, would be born with Down syndrome and would need the organization’s birth-to-three services.

“So we called STAR at that point and we’ve been in touch ever since,” Cioffi said. “I have been on the Board for 15 years, I believe. Molly went through the birth-to-three program, had a very positive experience, her two younger siblings, my daughter Caroline and her brother, Peter, went through the sibling workshop with STAR.”

“During her last year of high school, she started working on her Girl Scout Gold Award project, and her project involved working with STAR. Her project was designed to inspire families of children with special needs based on Molly’s own life experiences. And she officially received her Gold Award in June, so that was very exciting. Molly is now in her second year of college. She attends the Threshold Program at Lesley University, which is in Cambridge, Mass. She is having a great experience. She’s very busy. She has two days a week of classes, she has an internship three days a week. She lives in her own in a dorm. She takes Amtrak home to visit on breaks and she is living a good life.”

With STAR’s support, Cioffi said, Molly this past summer had two different employment opportunities, as a New Canaan YMCA assistant camp counselor for Camp Mini and at the Ann Taylor store at Elm Street.

“STAR has been a big part of our life,” Cioffi said.

Asked for his thoughts on the occasion of being voted on as a STAR Board member, Mallozzi said he was “thrilled to be even more closely associated with this amazing organization. ”

“During my years in office, I worked tirelessly to help STAR find a permanent home here in New Canaan,” he said. “The services STAR provides not just for the participants in myriad STAR programs and housing options they make available, but also to the loving family members of the participants, is nothing short of miraculous. I’ve admired the leadership of the STAR staff and board members for many years and I am thrilled to roll up my sleeves and contribute my time and energy to this organization.”

Mallozzi added that his employer, Bankwell, has hired a “wonderful STAR employee.”

“We love working with her and witnessing her exuberance every day,” he said.

Ernie Mysogland said that he and Susie see themselves as two of the many people who advocate for those with special needs.

“It is kind of fun to be the parents of 11 kids,” he said. “If you are wondering how to do that, I have a few things to explain. First of all, you get a magnificent wife. Just a model of patience and perseverance and she doesn’t let anything bother her. She handles everything. She’s really incredible. What could I do? I’m really a very smart fella: The more children we added, the earlier I went to work and the later I came home.”

Mysogland said he tallied up some numbers for the couple’s 50th wedding anniversary, and found that in those five decades, which included raising seven boys, Susie had made about 430,000 meals.

“If you’re worried about Thanksgiving and a few people coming over, you’re not getting any sympathy from me,” he said.

Mysogland continued, “Tonight is all about recognizing people that need. The greatest advocates of needy people are the brothers and the sisters. Jassinia is one of the 11 kids we had. If anybody gave her a hard time, her brothers and sisters would jump to her defense instantaneously.”

He said “it is our great pleasure to have these kids.”

“The most important thing is there are 19 grandchildren,” he said, “and the 19th is named ‘Ernie.’ ”