The town on Tuesday received an application to build a 6,080-square-foot home on a 6-acre Briscoe Road lot where a 1953-built modern-style home less than half that size now stands. 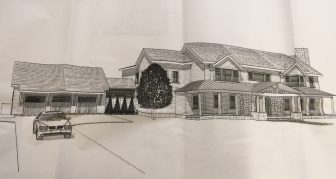 This 6,080-square-foot home is planned for 92 Briscoe Road in New Canaan.

The new 6-bedroom home at 92 Briscoe Road will include five full bathrooms, two half-baths, two fireplaces and a partially finished basement and attic, according to the building permit application.

It will cost about $850,000 to build, according to the application, and the architect and contractor on the job is the property owner.

A new, 4,816-square-foot home is planned for a vacant 2.25-acre lot on Valley Lane, according to a building permit application filed last week with the town.

The home at 6 Valley Lane will include five bedrooms, four full bathrooms, one half-bath, an open deck, covered front porch and unfinished attic and basement, according to the application, filed May 26.

It will cost an estimated $722,400 to build, the application said, and the property’s Norwalk-based owner will serve as both architect and contractor on the project. 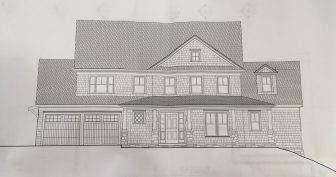 Here’s a rendering of the 3,925-square-foot home planned for 60 Hawthorne Road in New Canaan.

Finally, a 3,925-square-foot home is planned for a .3-acre Hawthorne Road lot where a Cape Cod-style house one-third that size had stood.

The 5-bedroom home at 60 Hawthorne Road will cost about $800,000 to build, according to a building permit application filed May 25.

It will include five bedrooms, five full bathrooms, one half-bath, an attached 2-car garage and finished attic and basement, the application said.

The contractor on the job is Easton-based Lee Schettino Construction, and the architect is New Canaan’s James Schettino.

The property had been sold in January for $750,000, and a demolition permit was issued last month for the former structure.