Visitors to Irwin Park and their leashed, four-legged friends soon will be able to refresh themselves while walking the Flexi-pave path that skirts the edge of the Weed Street property, officials say. 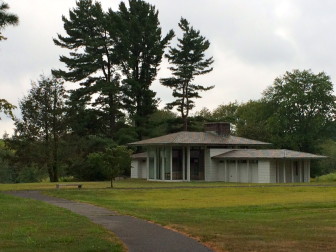 Gores Pavilion at Irwin Park. The New Canaan Garden Club would like to see a water fountain that serves park visitors and their dogs installed. Credit: Michael Dinan

Concerned about park-goers using a its hose to get a drink of water, the Garden Club of New Canaan is leading an effort to install a water fountain with two spouts—one waist-high for people and another down below for dogs—along the path that leads to Gores Pavilion, according to John Howe, parks superintendent in the Department of Public Works.

“We could easily run water from the garage there and we’re working on getting quotes” for the Garden Club, Howe said at the Sept. 9 meeting of the Park & Recreation Commission.

“It will be a handicapped-accessible fountain similar to the one at [Spencer’s Run], with a dog bowl, and we can turn off the water in the winter,” Howe said.

The cast-iron fountain would sit on a concrete pad alongside the Flexi-pave path, he said at the meeting, held in the Douglass Room at Lapham Community Center.

The town would pay for water and maintenance while the Garden Club would foot the bill for the project, Howe said.

Asked about the project, Katie Stewart of the Garden Club’s Irwin Park Committee told NewCanaanite.com that the group had seen “the wonderful one at the dog park” and that the hardware and installation could cost around $4,000.

According to Howe, there is concern “that people are drinking out of a hose that [the Garden Club] uses for watering some plants they have” at Irwin. That’s not healthy, Howe said. “You have no idea what went backwards into the hose when it shut off,” he said.