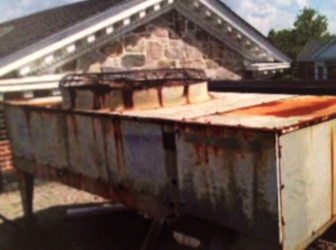 With the condenser out, the children’s library and Salant Room have grown uncomfortably hot and stuffy in recent days, and an elevator on which patrons, staff and volunteers rely to get upstairs is creating new challenges for workers while effectively preventing mobility-challenged residents from browsing, according to Library Director Lisa Oldham.

“The building is just crumbling,” Oldham told NewCanaanite.com. “Over the summer, to make sure the heating system was ready for the next season, we spent about $15,000 doing repairs and maintenance so that come October when we need to turn the heat on, it works. The drain situation continues to be a disgusting mess. I really hope it ceases. But again there is nothing we can do about that but deal with the situation as it comes up.” 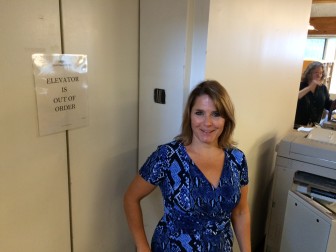 She referred to the five times that sewage has backed up into a sink in the library’s administrative area and erupted in the room. The useful life of the 1978-installed elevator is about 20 to 25 years, and it will cost about $16,000 to purchase and install an entirely new control mechanism for doors with new sensors, Oldham said.

“We are squeezing a lot of value out of every nickel here in the library,” she said.

Yet the emerging problems with the library’s physical building continue to mount, including the collapse two years ago of the sliding doors out back—in the last three years, the library has spent about $95,000 on unexpected capital repairs.

“It’s all unbudgeted, because we didn’t anticipate this,” she said.

The new woes arise as the library pursues a widely anticipated $25 million rebuilding project that’s expected nearly to double the amount of current usable space (just two-thirds or so of the current, 37,000-square-foot building is usable).

Asked for an update on the status of that project, Oldham said a capital campaign is underway.

“We are planning to build a new building. We are getting all of our ducks in a row,” she said. “The Capital Campaign Committee is working hard on the preliminary steps toward fundraising for the building. We are confident that the feasibility study projected range of earnings at about $25 million is achievable and we hope to start moving forward with building planning within six months.”

Meanwhile, the library staff is operating without the elevator—meaning their lugging books up and down in baskets instead of rolling them in carts—though for Oldham, the biggest problem with the failing elevator (which had been functioning for 15 months prior) is for the public.

“It’s not convenient for the team to be carrying books up and down—it slows everything down, it’s not efficient, but we can do it,” Oldham said. “Certainly for books upstairs—if somebody wants a book from upstairs and they’re unable to get up the stairs—we can go and get that for them. It means they cannot browse, though.”

“This is why we need a new building,” she said.