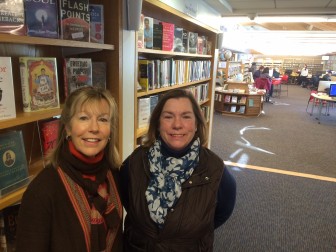 Even before formally launching the campaign, two local donors have generously given $250,000 to get the library going, Director Lisa Oldham said.

Working within a budget of about $25 million—that’s how much the library can expect to raise, according to a feasibility study completed in the fall—the new building will approximately double the facility’s usable space. As it is now, about one-third of the approximately 37,000-square-foot library is unusable, Oldham said.

“And that’s a really big deal for parents and children,” she said.

“We know that the space where we currently are serving the families of the this town through the children’s library s is less than half size needs to be to do the job as well as we would like to. We have got phenomenal staff and excellent collections. We just do not have any room, so a better, larger purpose-built space for a children’s area is key” as well as a more accommodating space for the library’s very popular lecture series, Oldham said.

The committee includes library Board of Trustees Vice President Lydee Hummel, board member Kate Burt and former longtime board member Anda Hutchins. First Selectman Rob Mallozzi also is serving as an honorary chair, Oldham said. The committee is working up its case statement and otherwise strategizing around fundraising. Renderings of the planned facility will be in hand for when the group starts reaching out to prospective donors in earnest.

Hummel, a New Canaanite since 1986, said the library’s time for fundraising “is now” and “we have had every indication that we can support this capital campaign.”

“We certainly have the capacity in New Canaan to get it done,” she said, adding that peer towns such as Darien, Ridgefield and Wilton all have seen new libraries go up in recent years. The directors of those libraries have generously shared their experiences in capital campaigns “and we have gleaned a lot of information form that,” Hummel said.

Hutchins called the rebuilding of the facility “a long time coming,” saying the library board’s executive committee—to which she belonged—had explored a renovation even 10 years ago.

While it isn’t clear just what the rebuilt library will look like, officials have said it could feature modern architecture in a space that’s more flexible, parking that’s carved into the slope at Maple and Main Streets and preserve a traditional look for an area dedicated to events and meeting spaces. The original stone façade with columns that faces Main Street also will be preserved, the library has said.