A rebuilt New Canaan Library could feature modern architecture in a space that’s more flexible, parking that’s carved into the slope at Maple and Main Streets and preserve a traditional look for an area dedicated to events and meeting spaces, officials said Tuesday.

A major piece of the planned new facility will include a design that can incorporate emerging technologies, Board of Trustees President Christian Le Bris said during an interview just after the library’s annual meeting. 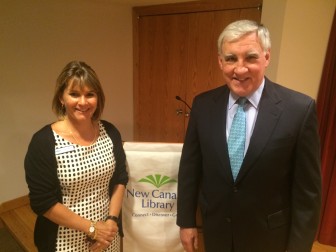 “That part of the library could be fairly modern-looking and track into the [mid-century] modern architecture idea that is around New Canaan,” Le Bris said after the meeting, held in the Adrian Lamb Room. “There are a lot of well-known buildings in town, so it would be tapping into that kind of idea.”

The comments come as the board—now that it has an idea how much money it reasonably can expect to raise for a new facility—works on a timetable for the widely anticipated project’s fundraising campaign.

“Barring a derailment of some kind, at some point we need to have some schematics, drawings and designs that we can share with the town,” Le Bris said. “And we’re going to need it to start the capital campaign, since people who are going to be significant supporters of this project will want to see [renderings of the rebuilt library].”

The current library is about 37,000 square feet, though 40 percent of that space is unusable, Le Bris and library Director Lisa Oldham said. A new facility will be somewhere in the range of 40,000 to 45,000 square feet, which would approximately double its usable space. The building itself would be a two-story structure, as it is now, they said.

“The usable space will go up tremendously, so it’s a real boon for us,” Le Bris said.

Original, high-level renderings for the new library pointed toward a building that’s not affordable, according to the recently completed feasibility study, Oldham said.

“So we’re now going to go back to the architects and they’re going to scale back,” she said. “The idea is not to go back to the drawing board, but to figure out what we can lop off, squeeze in, that sort of thing, and adjust the beautiful plans the town came up with to fit the budget we’ve got.”

Asked how those changes would affect the finished new building, Oldham said it would be the same idea—just smaller.

For example, she said, “There was originally in the plan a big multipurpose room as well as an auditorium. We’ve already talked to [the architects] about how we can do that in one space.”

Officials long have said that early community surveys showed that New Canaanites wanted certain pieces of the current building, including its original stone façade (facing Main), to be preserved.

Le Bris said an area of the rebuilt library that includes places where visitors would gather—such as an art gallery, meeting rooms and events spaces—“would incorporate the legacy building and that would have a more traditional look into the architecture and feel of the town.”

During the meeting itself, attended by about 30 people, Oldham and board members thanked the library’s generous donors, diligent staff and dedicated volunteers for helping the community facility operate at a high level.

Le Bris during the president’s remarks noted that the board had accomplished successfully its three major priorities for fiscal year 2014:

Oldham during her remarks said that in her first year (marked July 1), the library focused on collections, spaces (including a refreshed teen area), services, people, programs and experiences. She spotlighted:

“Looking to the year ahead, New Canaan Library aspires to enrich our town’s life through lifelong learning, through experiences and the exchange of ideas,” Oldham said. “We aim to reflect and lead the intellectual and cultural life of the town through careful curation of our print and digital collections, making available stimulating and relevant content in any format.”

Board member Dan Ward oversaw votes on the election to the board of Kathryn T. Burt, Alan P. Donaldson,