Note: The following summaries and photos are from parents of the New Canaan Soccer Association. 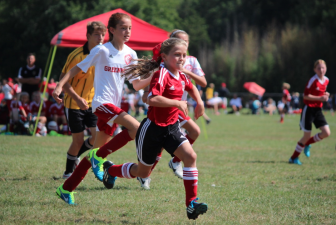 Despite a steady stream of shots on goal from New Canaan’s offense, Greenwich was the first to score following a breakaway driven shot that tipped off a player to roll into the net 15 minutes into the game. New Canaan soon recovered when Ava Gizzie intercepted a Greenwich attempted pass in front of its goal and blasted it deep into the top right of the net to end the first half tied 1-1. 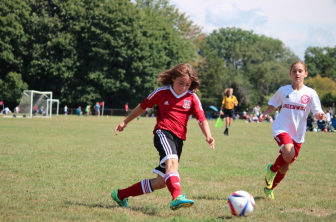 The second half brought out an energized New Canaan team that sizzled a wilting Greenwich squad in the afternoon heat.

The New Canaan scoring drive began with a corner kick to Gizzie who deftly dribbled past a crowd of Greenwich defenders to score the second of her three goals. New Canaan’s success came as it moved the ball around the field quickly led by Ellie Gallois who contributed to several explosive drives on offense. 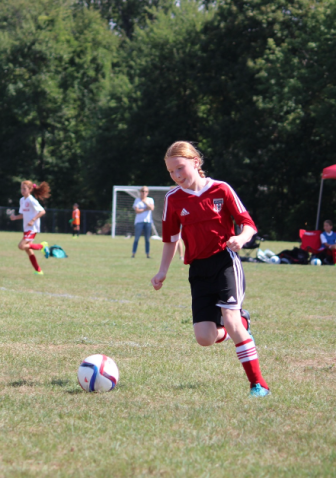 Evelyn Slatoff drives down the field to score against Greenwich. Contributed

This effort included a nice pass to Evelyn Slatoff that she drove down the field and launched a high center shot that floated over Greenwich’s goalie to make it 3-1. New Canaan’s offense maintained its pressure on Greenwich’s defense.

Notably, Katie Polacek rushed in to steal a toss from the Greenwich goalie and slip it in the net to make it 4-1. A few minutes later, Katharine Byrne seized upon a Greenwich handball penalty in its territory to deliver a power shot over the goalie’s reach to put it at 5-1. 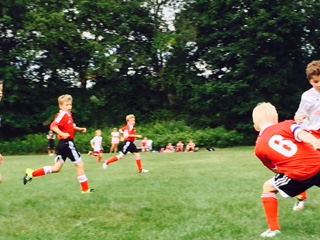 In its first game of the season led by coach Darren Kelso, the New Canaan U10 boys Red team came out strong to defeat Greenwich 5-3.

Greenwich took an early lead but New Canaan countered with two goals by Connor Lytle assisted by Cole Wilson. Shortly after Greenwich scored again, Benjamin Bilden skillfully passed another great ball to Lytle to give him a hat trick.

The score was knotted at 3-3 after another goal by Greenwich but that didn’t last for long, as Lytle handed to his hat trick to score yet a fourth goal, this time assisted by Jayden Oyekanmi.

Alex Werner, Augusto Baldini, Henry Silva , Jack Cuda and Ted Werner kept the pressure on with a barrage of quality kicks and shots. The Greenwich goalie could not withstand Will Langford’s shot on goal to finish off the game 5-3.

Max Lowe and Fletcher Heron were solid in goal throughout giving Greenwich minimal opportunities to score. 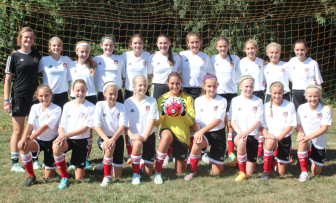 The New Canaan Girl’s U13 Black team started the season with a big win against Darien on Sunday.

In the second half, New Canaan came out strong and quickly broke the tie as Sophie Lagarde took the ball through Darien’s defense and get a pass off to Sophia Patterson who made a quick cross to Macy Owsley to score. New Canaan girls began to dominate and three more goals were scored before the whistle blew, starting with Owsley who scored her second goal of the game assisted by Annika Homberg.

As confidence continued to grow, the team’s 4th goal came from a beautiful set up by Sarah DiCosmo to Cameron Murphy who tipped the ball off giving St George her second goal of the game. It was Ognibene to put one last ball in the net.

With great defensive play by Ashlyn Neugeboren, Olivia West and Paige Volpe, the girls ended the game with a solid win, 5-1. 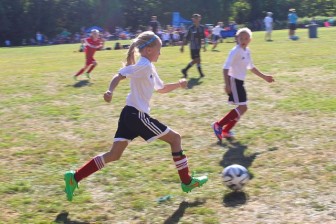 New Canaan Girls U10 Red started off the fall season with a dominating 5-1 win over Greenwich this past Sunday at Saxe Middle School.

Looking to avenge a season opening tie against the same team last year, it was New Canaan that capitalized first. Charlotte Walter drove the ball down the sideline and passed up to Isabel Cavanagh who crossed it to Lexie Tully who quickly delivered a rocket to the high right corner. This got the offense going with New Canaan controlling the ball well with several passing sequences and shots on goal. The Red scored again when Ava Pertusiello stole the ball near the top of the box and launched a hard shot over the goalie’s head.

Greenwich made several attempts to counter and twice was able to get a shot on net, but New Canaan first half goalie Fiona Mueller handled each perfectly. As the first half progressed, midfielders Kathryn Norton and Lila Volpe were relentless chasing down Greenwich’s mid-fielders and turning the ball back up the field. New Canaan’s next goal was much like their first. This time it was Kelly Polacek streaking down the sideline and passing to Cavanagh who crossed to Pertusiello who drilled it to the low left corner.

Up 3-0 to start the second half, the Red were not about to sit back and coast. Maggie Murphy and Devon Russell immediately went on the attack with multiple drives into the box and shots on net. It was only a matter of time before they were successful as Murphy fought past the defense and sent a pass to Russell who one-timed it to the left corner.

New Canaan rarely let Greenwich venture too far past mid-field. Whenever they did, midfielders Katie Quill and Tema Wagner quickly intercepted to apply pressure back in the Greenwich zone. Midway through the second half the Red were once again threatening on the doorstep. Greenwich’s goalie attempted a goal kick that rebounded to the front left of the box. Pertusiello came racing in with a slide kick just before the defenders could clear and put New Canaan up 5-0.

With a commanding lead, coach Alan O’Keeffe instructed the Red to hold back. Greenwich took advantage with several breaks down the middle, but second half goalie Cavanagh was dynamic making three point blank saves. Greenwich was able to net one off a scramble in front of the net, but it was too little too late as New Canaan chalked up a 5-1 win.