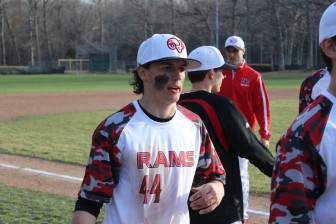 David Giusti’s four-hit, 13-strikeout performance against Trumbull last week was one of the best individual New Canaan pitching performances in recent memory. What made the 1-0 Rams win even more remarkable is the fact that the senior right-hander sat out all of 2014 with a stress fracture in his back.

“As he got off the bus I could sense something special,” Rams head coach Mitch Hoffman told NewCanaanite.com.”Last season sucked for him, it just hurt so bad and we hurt so bad for him.”

Giusti solidified his position as the Rams go-to pitcher against a team that has evolved into one of New Canaan’s most formidable foes over the past couple of seasons.

“Giusti is our ace in many respects,” Rams head coach Mitch Hoffman told NewCanaanite.com. “He wants the stage and the ball in big moments. Trumbull is a nice rivalry for us now and for his first game back to be so solid is a credit to his hard work and determination.” 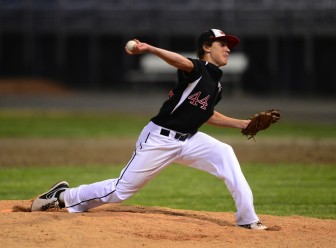 This work ethic has propelled the Rams co-captain to the next level. Giusti will be taking his talents to Lafayette College, making him the second Rams player and fourth under Hoffman to play at the coach’s alma mater. Former Rams ace Alex Farina is currently a senior pitcher for the Leopards. Before that, Peil Pennington and Adam Bucci played for Lafayette after starring for Hoffman at St. Luke’s.