Congratulations to Courtney Overacker and Chase Williams for being named NewCanaanite.com Athletes of the Week.

The New Canaan girls varsity soccer team’s 8-5-3 record in 2014 was good enough to qualify for the Class L state playoffs, thanks in large part to the play of co-captain Courtney Overacker. 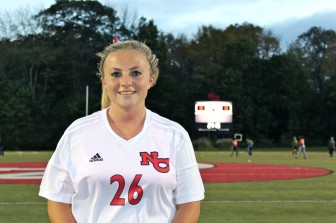 The senior forward has had a solid performance on the pitch this year, notching 6 goals and 5 assists on the season. Overacker’s penchant for coming up big was especially noticeable down the stretch, scoring a goal and an assist in a 2-0 win over Danbury last Thursday and following it up with another goal and assist in a 7-0 win over Bridgeport Central on Saturday.

“Important goals for the team in tight games,” Rams head coach Kirk Bamford told NewCanaanite.com. “She is a captain, focused, wants to improve and leads by example.”

With Overacker – along with fellow co-captains Kyla Persky, Gabriella Borea and Marina Braccio – leading the way, the Rams also secured an FCIAC playoff bid as they won Thursday night’s matchup 4-0 against Stamford. The New Canaan win coupled with a 1-0 Trumbull loss to Greenwich has vaulted the Rams into the conference postseason. 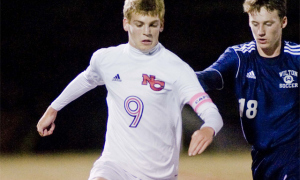 Another soccer player who leads by example is Chase Williams, co-captain of the boys varsity team. A starter in all 16 games this season, the senior striker has had four goals and four assists, including a key goal that salvaged a 1-1 tie against Staples on Sept. 30. With that said, for Rams head coach Rich Sutherland, Williams’ impact goes beyond statistics.

“He has been instrumental in passing on information on other teams and having a knowledge of players throughout the league,” Sutherland said. “He has shown great leadership qualities and likes to lead from the front. He’s always keen to ensure the boys are prepared and ready for the games and practices.”

After a 3-10-3 season in 2013, the Rams improved to 5-7-4 this season. Thanks to the efforts of Williams and fellow co-captains Alex Hutchins and Teddy O’Rourke, the Rams qualified for the Class L state playoffs.