New Canaan Library is one of the few town venues where each age group can find its niche. It holds a special place in many of New Canaan hearts and our newest librarian, Kayla Del Biondo, hopes it will do the same for her. 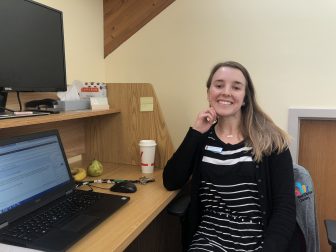 Del Biondo graduated from Syracuse University last month with a master’s degree in Library Information, or an ‘MSLI.’

“When I was looking for a job, I applied to a little bit of everything,” Del Biondo said. “But what attracted me here was the digital services piece.”

Since her internship at the West Point Military Academy library where she helped form their digital collections of archived newspapers, she has taken interest to digital work.

“What’s really cool about digital collections is that people from all over the country or world can access their information,” Del Biondo said.

After applying, Del Biondo swiftly interviewed for and ultimately accepted her new position within weeks.

“It was pretty seamless, like it was meant to be,” she said.

Her first day at the library was May 29.

Del Biondo said she didn’t always want to be a librarian, but gravitated toward her interests and ended up one.

“I’ve always been interested in people, the different problems they face and how they work,” she said. “But I realized that helping people is a very broad aspiration.” 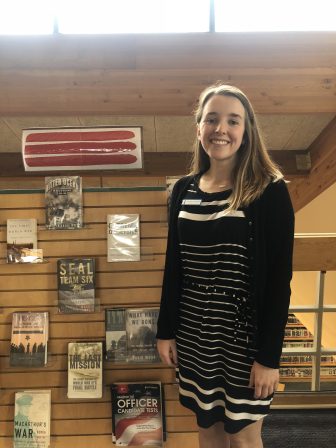 It wasn’t until her senior project as a SUNY Purchase undergrad, where she wrote a 66-page paper about food and social media, that her attraction to libraries grew.

“I worked really closely with librarians for my project,” Del Biondo said. “The process of finding different resources and information became super interesting to me.”

After graduating with a bachelor’s degree from SUNY Purchase, she took a year off to waitress, write for a food magazine and travel to Europe.

“The more I thought about it, being a librarian was a really good fit, especially for myself who has so many different interests,” Del Biondo said.

These interests range from crafting, to raising her five chickens at home, to even boating in the summers at Candlewood Lake, she said.

At the library, Del Biondo hopes to modernize services and bring relevant information to those who need it.

“My little headline on my personal website is ‘Not Your Average Librarian,’ ” Del Biondo said. “A librarian can act as a facilitator for all different types of experiences that are related to information and people, it’s not just about the books.”

She discussed the ‘IT Girl’ movement at Syracuse University and her role in its development.

“IT Girl is for juniors and seniors all over the country who want to learn more about IT while also being at a college campus for the weekend,” Del Biondo said. “We spoke about how to use games to teach information literacy in the library world.”

Right now Del Biondo lives in Westchester County, N.Y. and sees herself moving to Fairfield County in the next couple of months. While right now she does not feel she has the experience to become an academic, she has long-term research goals.

“I love research, so maybe one day I’ll be a professor of some sort,” she said. “I love that three-part role professors have of teaching, researching, and publishing.”

Del Biondo said she wants to “totally immerse herself” in New Canaan Library culture and get to know those around her.

“My coworkers seem really awesome, I’m just ready to dive head-first into my career,” she said.