An Oenoke Ridge Road couple is calling for town officials to force a neighbor to stop using a guest cottage as a dwelling, keep livestock and attendant feces away from a shared property line and ensure that the animal waste and sewage from the accessory structure pose no risk to their drinking wells. 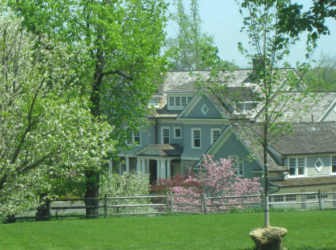 According to a letter filed on behalf of Peter and Kathy Streinger of 785 Oenoke Ridge Road, activities on the property to their west violate the New Canaan Zoning Regulations and conditions attached to a subdivision approved in 2003.

Those activities also violate several parts of the Town Code and “reduce the value of the Streinger property,” “interfere with the quiet enjoyment of their home” (their 2004-built, 10,000-square-foot house sits on 4.32 acres, tax records show) and “threaten to contaminate the Streingers’ potable water well,” according to a May 23 letter sent to the New Canaan Planning & Zoning Commission by attorney Joseph Williams of Shipman & Goodwin, whose locations include offices in Greenwich and Stamford.

“The Streingers have brought one or more of these violations and issues to the attention of” town officials and “their inquiries and complaints, made in good faith, appear to have been disregarded or, worse, treated with rudeness and disdain,” the letter said.

The town has not yet received a formal response from the Streigners’ neighbors—either from the property owners themselves or any attorneys who may act on their behalf, according to a public file on the matter.

The Streingers’ communication with the town regarding their neighbor’s property appears to have started in April.

Like talking about what’s happening in New Canaan? Join NewCanaanite.com at our free monthly Community Coffee, to be held 9:30 to 10:30 a.m. on Thursday, June 9 in the Lamb Room at New Canaan Library.

Citing documentation tied to the 2003 subdivision, the Streingers say they take issue with a series of decisions made by local public officials.

“But he [a town official] does not explain why the amended regulations trump the condition of approval barring use of the cottage as a dwelling unit,” Williams said in his letter.

The town appears to rely in OK’ing use of the cottage as a dwelling unit on an unrelated special permit, Williams said—specifically, a permit that exempted historic accessory structures (such as barns) from coverage, but “had nothing to do with the cottage” being used as a living unit.

Williams also said in his letter that the guest cottage is not served by a septic system, asserting that it must be sending sewage into an “open cesspool” located up-grade from the Streingers’ home.

Alerted of the situation, a New Canaan municipal worker examined the cesspool and “inexplicably deemed it to be approved, despite the lack of any records showing Health Department approval,” Williams said.

“We have been provided no explanation as to how the Town of New Canaan could deem an unpermitted cesspool used by an illegal dwelling unit permissible, particularly when the most recent septic system plan approved by the Health Department does not show it at all. The cesspool has apparently been declared ‘grandfathered’ by the Town based on cursory visual inspection and despite the lack of any proof that it ever met the health code at any time, let alone that it complies with current requirements.”

In his letter, Williams also raises concerns about the alpacas and chickens on the neighbor’s property and the effect their waste might have on the Streingers’ well water and wetlands, as well as increased coyote activity in the area that he attributes to the livestock next door.

A fence installed on the neighbor’s property appears to be forcing coyotes to walk “up and down the property line and driveway at all times of the day, including when the Streinger children are walking from the school bus,” Williams said.

“To make matters worse, the fence is electrified, which is a danger to kids playing on or near their property, and a hunting station was erected at a fence opening on the empty lot.”

According to Williams, pleas for the town to intervene have gone unheeded, and the presence of animal excrement constitutes blight.

“At present, while the property is under scrutiny, the piles of animal feces within feet of the entrance of the Streingers’ home have been, at least temporarily, carted away,” Williams said in his letter. “However, farming equipment is still clearly visible from their property daily and overnight along the entrance to the Streinger home.”

According to Williams, the Streingers are just now bringing the issues regarding the guest cottage to light because they only recently learned of a 2003 Letter of Agreement regarding the property and related 2011 deed.