A bank has accepted a prospective buyer’s offer on the 1780 home at 4 Main St.— just before St. Michael’s Lutheran Church as you climb up toward Oenoke Ridge at God’s Acre.

Nobody has lived in the 10-room, 7,000-square-foot home for at least one year, according to officials with the Historic District Commission, and it’s fallen into disrepair. 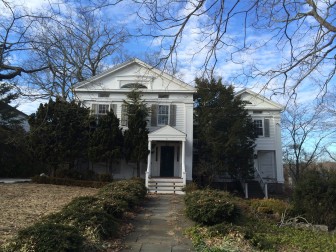 This week—prior to actually purchasing the antique home—New Canaan resident Janet Drexler went before the commission to gauge the possibility of making some upgrades (mostly for safety reasons) to the driveway, a railing and the garage.

The commission signs off on external changes to 21 buildings located within the district. They’re located around God’s Acre. Here’s a map. Commissioners voiced support, with approval pending a look at the actual drawings for what Drexler wants to do.

“We have been, as you know, very concerned about that house and the fact that there is actually going to be a buyer who is concerned and loves the older house is exciting to me,” said Janet Lindstrom, acting chairman of the commission (and executive director of the New Canaan Historical Society, where the meeting was held). 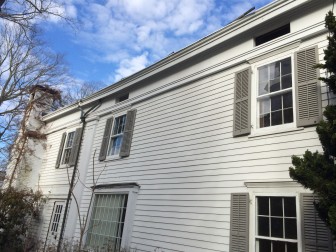 Here's the west side of the home at 4 Main St. Credit: Michael Dinan

Specifically, Drexler was seeking a preliminary “yes, it’s possible you can do that” on three things:

With assurances that any proposed changes would be in keeping with the character of the existing structure and district, the commissioners voiced preliminary support. 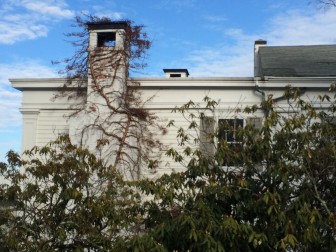 The house at 4 Main St. is in disrepair. Officials say nobody has lived there for more than one year. Credit: Michael Dinan

Here’s what Lindstrom said: “What I am hearing is the commissioners feel that the modifications you would be making would be within the character of the house and upon your submittal of what you are doing, we would consider it.”

Commissioner Marty Skrelunas suggested brick or crushed stone paving for the driveway bump-out, and the group suggested Drexler in drawing up her plans keep the paving to a minimum.

The builder in the renovation would be Andy Glazer, she said.

Tax records show that since 1984, the home has been owned by James Talbot. He bought it for $365,000 in June of that year. The house and property last were assessed at $1.1 million.

Drexler said she and her husband live nearby, drive by the house all the time and are fond of it.

“We love the house. We don’t want to change anything from the front of the house. It’s beautiful,” she said.

Here’s a map of the area: