Days from now, the world’s greatest sporting event, the 2018 FIFA World Cup, will kick off in St. Petersburg, Russia. National pride stirs the passion and souls of fans from all over the world – from the championship expectations of the millions of fans from powerhouses like Brazil and Germany to the 330,000 chanting Vikings of Iceland, the smallest country ever to qualify. From the long-suffering supporters of the home of soccer, England, to the return to World Cup play after a 2014 Asian no show with Japan and Korea. The intrigue of the story lines abound and are as compelling as a junior travel soccer match played out by 22 boys here in chilly New Canaan last Sunday. 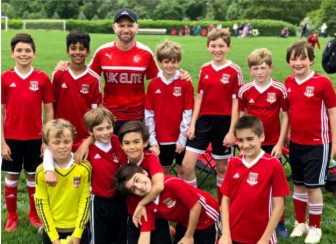 Stamford’s 10 and 11 year old boys came dressed in black. They are tall, big and fast. Based on prior years’ play, this well-organized youth club consistently pose a stiff challenge. Making matters worse, the New Canaan boys lost five players to injury and scheduling conflicts. Special thanks to John Murphy and Holden Prymas for rallying to our cause and playing for the Red in a very short handed situation.

Joaquin Blanco and Brooks Walker deserve recognition for this match and for most of their tenure with NCFC travel play. The two regularly form the back line and tirelessly chase down the opposition’s best athletes week after week. And this week was no exception as Stamford dominated the first half. Lise Arnold identified Stamford’s best player as “pink shoes” as he was fleet of foot with his colorful cleats, controlled and athletically able to control the pace of play. Collectively, Stamford’s time of possession exceeded 70 percent, while their midfield stymied Drew DeGaetano, Max Maggard and Rohan Shenoy’s attempts to challenge Stamford’s first half dominance. Alas, “pink shoes” found a crease and made a skillful pass thru the center finding two boys in a breakaway yielding a Stamford goal. 1-0 to the visitors at halftime.

There’s an old adage in sports – “You can’t teach speed.” Let me add to that please…”You can’t teach passion.” Athletes at all levels either have it, or they don’t. This Sunday the New Canaan boys had it. They pushed back and began to find their rhythm. Passes began to click and players began to find their groove. Ryan Stannard found openings in the middle of the field and drew the opposition. In one key sequence, Stannard dished off to Javier Minuesa who dribbled down the center creating an opening on the right. Dylan Ho seized on the opportunity taking the nicely led ball from Javi, beat two defenders and delivered a pretty goal, equalizing for the New Canaanites. Stamford came back shortly afterwards to take back the lead 2-1. Matches like these raise the level of play and intensity. And as New Canaan began to take back the advantage, Stamford intensified their physicality hoping to use their size and strength to stare down the resurgent NCFC side. Several tumbles, falls and collisions later a yellow card emerged against Stamford’s defender. Minuesa teed up his direct kick from just outside the box and buried it in the corner – just like that 2-2. Recognizing the chemistry between Minuesa and Ho, Stamford’s coach put “pink shoes” on Ho hoping to thwart any further damage. Speed and passion overcame that chess move. Javi did his thing, dribbling thru the midfield drawing the defense. Once again Javi spotted Ho on the right and, like the great ones, delivered the perfect pass in that moment. Ho took the ball, sped past one defender, cut past another and had the Stamford goalie on his heels. Ho took the shot and found the left corner and suddenly, coming back not once but twice, New Canaan had its first lead. But Stamford did not go gently into the night. Two intense rushes by the opposition nearly yielded goals were it not for the fast hands and strong play of Will Arnold in goal. At the final whistle, NCFC 3 – Stamford 2!

Then, according to Stacey Walker, the true passion of sports emerged. “I saw Angela Ho leap from her sideline chair into the arms of her husband (that’s me) while he performed a small pirouette while receiving high fives from the other parents.” Victory and passion. Gosh, it’s why we love sports so much in this town.