Greg Macedo walked a hallway toward the northwest corner of Saxe Middle School on a recent weekday morning, in what’s known as the “8th Grade Wing,” part of a 1997 expansion of the brick building at Farm and South. 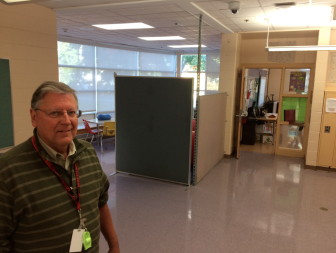 Saxe Middle School Principal Greg Macedo stands near a hallway alcove that’s been converted into a Special Ed instruction area due to a shortage of space. Credit: Michael Dinan

There, a freestanding office partition that stands five feet high—a bit shorter than the average height of a 13-year-old boy—“separates” the hallway from a 150-square-foot area never meant to serve as a classroom.

Yet—in a far-reaching knock-on effect that has seen rising enrollment, new programming and state-mandated classes push “regular” classrooms into what had been designed as Special Education spaces—the now-1,328 students at a school built to accommodate 1,200 at most, have forced Macedo, Saxe’s principal, to push Special Ed programming into what had been office spaces for teachers, storage rooms and hallways. 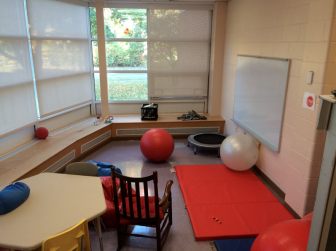 “We have balanced the space problems on the backs of our neediest programs,” said Macedo, looking over this makeshift classroom, cordoned off five years ago and including the assorted bouncy balls, mats, bean bags and trampolines that provide physical stimulation for kids on the autism spectrum.

“Kids would not feel like they are in a classroom here,” he said, speaking from a similarly carved-out hallway space one floor up. “They feel that they are in a hallway that has been converted because we are out of space.” 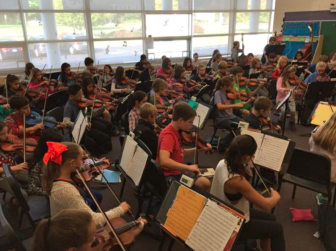 For most of his 23 years as principal, Macedo has been called a “magician” by many, including members of the Board of Education, for his innovations of finding space and accommodating schedules at Saxe. It’s a moniker he resists, noting that while Saxe teachers “have been so professional and the students have never been educated to feel that they are in substandard spaces,” still, “if you are a child and you have to get your tutorial help in a nook in a hallway, when people are passing by and you are visible, that does, I think, over time make you feel less than a typical student.”

Macedo added: “No school district ever wants to do this for more than a short-term approach. This would never become an approach we would be proud of. But when you look back over 15 years, we have never been given relief in space in order to reverse that. So this is the first opportunity where people have asked us, ‘What are your space pressures?’ and ‘How have you accommodated being over peak?’ And, sadly, we have had to show people that it is a numbers problem.” 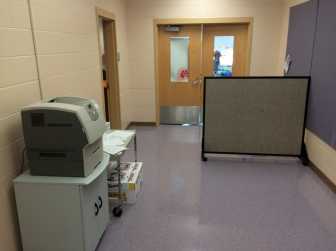 Behind this divider in the middle of a hallway in the 7th-grade wing at Saxe Middle School is a desk and chair designed for one-on-one project work. As designed, that work would be done inside the room behind it, now converted into an under-sized Special Ed space. Credit: Michael Dinan

In more ways than one.

On Monday night, the Board of Education unanimously supported a proposed $18.6 million building project designed to correct the space crunch at Saxe. Said to cost $16.2 million after state reimbursements, the project, if approved, could start next summer, advocates say, and wrap up prior to the start of the 2017 school year. In order to set that timetable in motion, the project’s advocates say, Board of Finance support must be secured next month (followed by the Town Council). 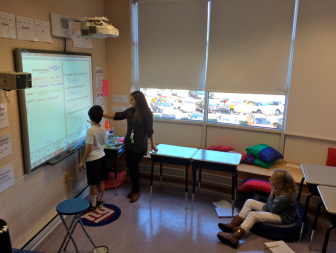 A 150-square-foot room designed for special projects work is now a Special Ed room at Saxe that serves as many as eight kids at once. Credit: Michael Dinan

As proposed, the project at Saxe has three parts: renovate the 58-year-old auditorium (closed since PCBs were found there in December), “right-size” music rooms while adding storage space, and build a 12-room addition to meet enrollment needs.

It isn’t clear whether the committee which developed the proposal at Saxe will garner the required support from town bodies that ultimately must sign off on it. Recently, some members of the Board of Finance expressed concern about how New Canaan can afford both the full project at Saxe as well as creation of a parking deck at Locust Avenue (as much as $5 million) and capital projects at Waveny House (as much as $8 million) and the water treatment facility (as much as $20 million). 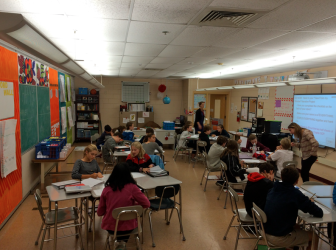 One of the computer labs at Saxe had to be “hijacked” for this 7th-grade social studies room because of space issues. Credit: Michael Dinan

On Monday, a group of more than 35 New Canaan taxpayers—including but not limited to parents with kids in the system now—called for candidates for public office to answer this question: Will you support the full, $18.6 million project to renovate and expand Saxe Middle School?

The Board of Ed in its presentation Monday said the project would cost taxable New Canaan taxpayer accounts, on average, $148 per year (see the first PDF at bottom of this article)—a figure cited by the co-presidents of the Saxe PTC in a letter to the editor. 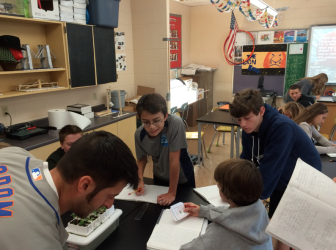 Meanwhile, though raw numbers of students affected may have pushed Special Ed near the end of the domino row, the space problems at Saxe reach well beyond that program, into the regular curriculum, science and arts, according to Macedo.

For example, two computer labs have been converted into classrooms, including one 7th-grade social studies classroom that, because it was meant to be a computer lab, not only is awkwardly shaped and windowless, but also is audible to the other “computer lab” next door that’s separated by a 15-year-old divider which doesn’t fully seal to the floor. And because the state mandates computer testing of every student for the SBAC and computer space has become so precious, kids must be tested every day from March to June, with laptops taken out of service to classrooms, in order to meet the requirement. 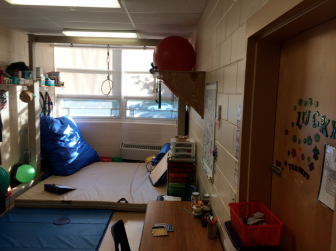 A storage closet for now-crowded science classrooms on either side of it in the 5-6 grade wing at Saxe Middle School has been converted into this cramped occupational and physical therapy space for Special Ed kids. Credit: Michael Dinan

And in order to ensure that all the students at Saxe are attending sufficient core curriculum, world language, physical education and art classes, kids are forced into awkward schedules while mixing and matching across multiple grades in ways they never have.

“When people say—What is the educational impact of being in a school that has been under-built for the amount of kids that are there?—it’s the pressure that is created is we have to take those 1,300 kids and run them through simultaneous scheduling so that everybody moves every 46 minutes,” Macedo said, adding that a school built for a maximum of 1,200 kids rightly should have about 1,050 students “because no building should ever be at peak for very long.” 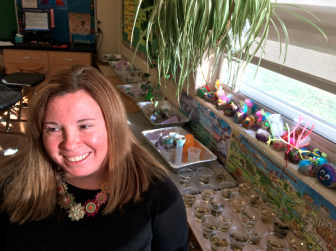 Macedo counts 27 total uses of space at Saxe now that were not part of the 1997 project design. They include conference rooms that have become general classrooms, storage rooms that are now administrative offices, practice rooms becoming storage rooms and a multipurpose/dining room that serves as a science classroom.

Not all of those accommodations would be undone by the project as now proposed, he said. For example, two computer labs would need to stay offline and used as general classrooms, some storage spaces would still be used for instruction and two undersized science classrooms would remain, even with the full $18.6 million Saxe project going forward. 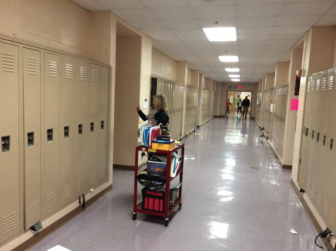 And already small-sized classrooms are pinched even smaller because there’s little or no storage space (since those small rooms have been converted for instruction).

“I do not have a closet in here for anything, so everything gets stored into boxes just stacked up on one another,” Antal said during a class last week, items from a STEM class also stowed in pieces throughout the room. “It’s a tight fit.” 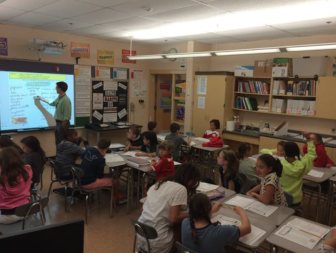 Nearby, a 500-square-foot classroom built for special education has been taken over for a health education taught to 20 to 25 kids—a space that should itself be half again as large, Macedo said. And in the 7th-grade wing, up to eight Special Ed kids are taught in 150-square-foot space originally designed for a far smaller group, while another alcove for one-on-one project work has been created outside the door by an office divider.

In the fifth-grade wing, a storage closet wedged between two science classrooms has been converted into an occupational and physical therapy room for Special Ed kids—an area about half the size of what it should be, Macedo said. 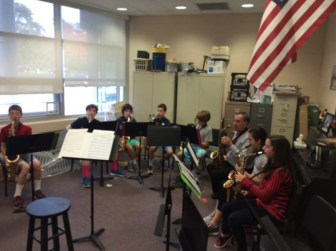 The knock-on effect for the adjacent science rooms is that its walls are lined with boxes and shelves of supplies for both regular and STEM classes— books, magazines, rocks, pond water samples (the STEM kids are building septic and sewage treatment systems), goggles, beakers, rulers—that otherwise would be properly stored.

Saxe science teacher Alicia Collins said the crunch affects classroom instruction “because kids are up and about and working in groups all the time” and they lack safe pathways to get to sinks and other materials.

“I don’t have a closet so all my stuff is either on top of or at the bottom of shelves,” she said.

3 thoughts on “‘On the Backs of Our Neediest Programs’: Seeing Saxe Middle School with Principal Greg Macedo”