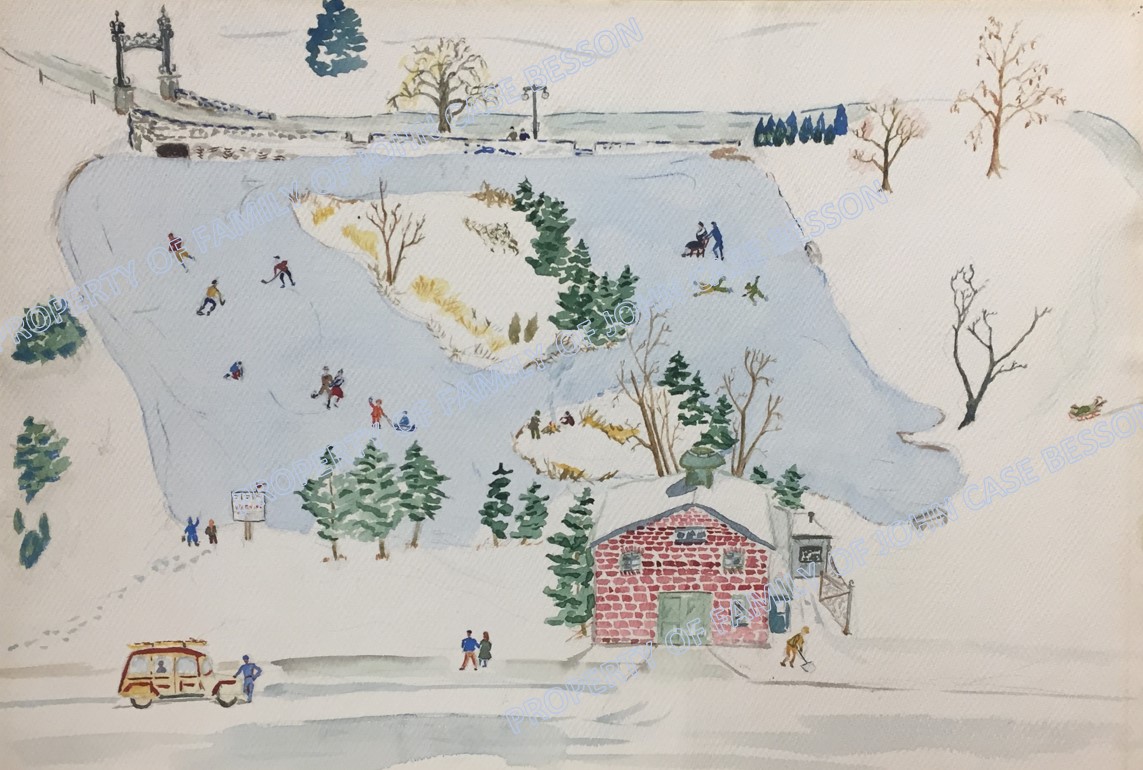 Happy Childhood memories of growing up in New Canaan. This is what comes through during interviews with two long-time residents of New Canaan on the topic of Mead Park and the little brick building perched on its northern border.

So much controversy circles about this building that there is not even consensus about its name. Cassia Besson Ward said the official name in her memory was the Park Maintenance Building, but frequently refers to it as the “Brick House.”

She grew up in the little grey house across the street and shared, most unexpectedly, this watercolor of a winter skating scene.

Besson Ward said she has fond memories of growing up with Mead Park as her front yard, playing with her sister and other children in the streams, making houses out of pine needles behind the “Brick House” and even staging an amateur “Greek Pageant” in the park.

Painted by her father, John Case Besson, the watercolor includes specific individuals from her childhood. Cassia and her sister are depicted with a sled, one riding, the other pulling. Her parents skate cross-armed nearby. Friends whom Cassia referred to as “well to do” are included next to their woody station wagon which “brought kids to come skating,” she said. In the foreground, apart from all the frivolity, John Case Besson depicted Riley Hogan shoveling snow from the sidewalk.

“Riley did stuff like that,” Cassia recalled. She noted that Riley is depicted wearing his “leather service jacket and boots,” his typical apparel.

Walter Riley Hogan was New Canaan’s first superintendent of parks, a post he held for 35 years beginning in 1931, a tough Irishman, first generation American, and native of New Canaan who had served in both World Wars. Between them, from his base in the “Brick House,” he assumed the monumental task of maintaining Mead Park which included keeping the town children in line. Riley “did not countenance” such delinquent behavior as boys going up on the train tracks to flatten pennies, according to another long-time New Canaanite, Jim Bach. Cassia described Riley as “very neat, organized and taciturn.”  Jim has the same memory of Riley and referred to him as “a legend.”

Jim Bach’s father ran the Melba Inn just up the hill on Park Street and for Bach, Mead Park was among other things, his garden. He described a town garden south of the tennis courts where citizens grew vegetables including those Jim tended for his family, the Inn and, during the Depression, those unfortunates who came to the back door of the Inn asking for food. During the summer, Kay O’Brien oversaw the garden and the wife of Augustus M. Gerdes, the first painter to settle in New Canaan, funded a one-dollar award for the child who put in the most work in the garden. Another child would receive a dollar for the “largest turnip” according to Bach.

Both Besson Ward and Bach have strong memories of Hogan ruling Mead Park from the “Brick House.” The ground floor was used for the storage of large lawnmowers. Park equipment was stored neatly in the building. This ranged from tennis nets to horseshoes (pits were over where the swings are today according to Jim), baseball bases and football goals (both baseball and football were played in the park). Upstairs, Besson Ward recalled, the Town Band practiced, sending “Oompas” across the street to the Besson house on Summer nights.

Although an amateur, Besson Ward’s father was invited to join the local watercolor club which included local professional New Canaan artists Walter “Wally” Richards and Hardie Gramatky. In what the Besson family refer to as “Dad’s Grandma Moses,” John Case Besson depicted what for Besson Ward and Bach are fond memories. Based upon those memories, Bach recalled the annual ritual of Riley setting everything up for skating. This including creating firepits (you can see one in the painting) on the two islands which existed back then (the second island is now part of the “peninsula” behind the building).

Although Besson Ward and Bach differ on their views of the future of the “Brick House,” both depict the building as being an integral part of Mead Park. Their memories describe the building and facility as a central part of the community at a time when New Canaanites lived by the New England principle of thrift—making use of what you have, far from today’s disposable society.

“My father would love it if his picture could be used in this way”, Besson Ward said. She and her family would like to see the town “reclaim the Brick House” and repurpose it, “keeping the feel of the place.”

Her memories, both spoken and illustrated in her father’s watercolor, and her appreciation of the integral part the building played in the history of Mead Park and the town should help us all understand why some structures are the embodiment of our history. They are the physical containers that hold our memories.

Here’s hoping these glimpses, both written and painted, illustrate how sometimes, something which seems small, neglected and useless is actually an integral part of who we once were and hopefully still are, a thrifty community with close bonds with a beloved park at its heart, anchored by a little “Brick House.” Now that is something worth keeping.

8 thoughts on “Op-Ed: Memories of a Winter Skating Scene”