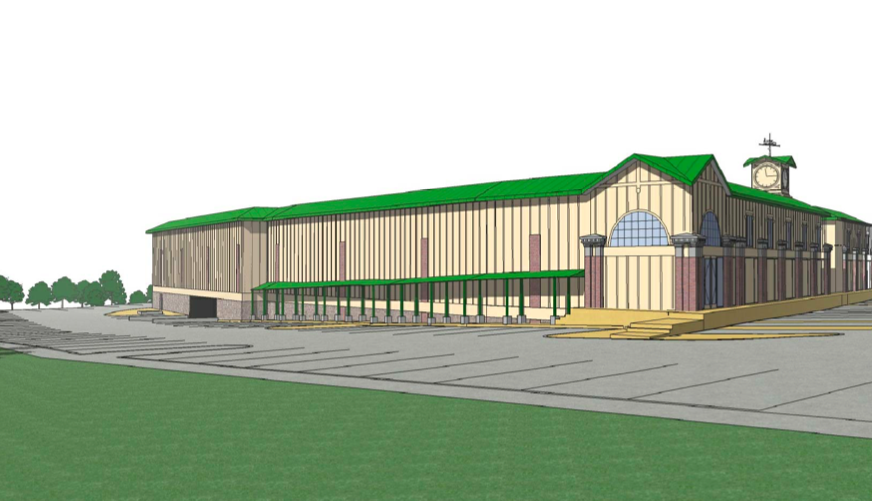 This rendering shows a view of the east side of the building.

The owner of the Pine Street building that houses Walgreens is seeking permission to open access to an unused 52-space underground parking garage, according to an application filed with Planning & Zoning.

Constructed at the time the building at 36 Pine St. went up 12 years ago, the vast garage was created in anticipation that the Planning & Zoning Commission would update local regulations so that underground parking was allowed in the Business A zone, according to an application filed on behalf of the property owner, New York-based Eton Centers Inc.

An amendment to the New Canaan Zoning Regulations came into effect about three years after the building’s construction, according to the application filed by attorney Steve Finn of Stamford’s Wofsey, Rosen, Kweskin & Kuriansky LLP.

“Recently after urging by the first selectman and others, Eton Centers Co LLC has decided to ‘open up’ the underground space and utilize it for a parking garage with ingress and egress to the garage to be constructed along the easterly side of the building,” Finn said in a narrative that accompanied applications for Special Permit and site plan approval.

A site plan shows a 28-foot-wide proposed garage opening at the far end of the east side of the building (see rendering above).

The regularly updated document that helps guide land use planning in New Canaan, the Plan of Conservation and Development or ‘POCD,’ “strongly endorses addressing a parking deficient for both downtown patrons and commuters,” the application said.

“The parking garage is within easy walking distance to the train station and downtown and will bring more people to the downtown area on a daily basis. The POCD also views underground parking favorably because it helps minimize land area utilized for surface parking which furthers the goal of the POCD to preserve open space, improve the streetscape and support public transit. The improvements to the property will barely be noticeable as the space has already been constructed and the ingress and egrets to the underground garage will not be observable from the street as it is located toward the back (easterly side) of the building. Similarly, this project will not hinder or discourage the appropriate development of adjacent land and buildings or impair the value of thereof. There are no artificial lights, colored lights of any nature, flashing lights or loud speakers or any other noise making devices that will be included in this construction.”

The application includes a traffic study showing that “there will be no significant adverse impact on traffic or safety, nor unreasonable increase in traffic congestion,” Finn said in the application.

According to the traffic study, from Fairfield-based Fred P. Clark Associates Inc., about 30% of motorists using the lot will arrive and depart from the side closer to Grove Street, with the remaining approximately 70% using the garage’s the “East Access Drive” arriving and departing toward Cherry.

Even with most vehicles exiting on the side, the proposed commuter garage wouldn’t affect peak hour traffic at the nearby light at Pine and Park Streets, the traffic study found.

The “results of analyses indicate that the signalized intersection of Park Street at Pine Street/Cherry Street will maintain the same levels of service, with little to no increase in vehicle delay during both peak hours,” the study said.

The application specifically calls for “Construction of ingress and egress for previously constructed underground space for use as a parking garage and associated improvement including modification and/or construction of walls as shown on the plans submitted herewith.”

First Selectman Kevin Moynihan has said in the past that he came to learn of the parking lot’s existence after taking office, through a conversation with the chief building official. Improving commuter parking had been one priority of Moynihan’s platform in seeking the town’s highest elected office two years ago, and New Canaan since then has seen the introduction of the Boxcar app at the St. Aloysius Church parking lot and Talmadge Hill commuter lot.

P&Z, which derives its authority from state statute, is to take up the Pine Street application at its July 30 meeting.

According to Finn’s application, “The project will meet the drainage certification requirements for the town of New Canaan, and the garage will contain a fire sprinkler system and otherwise meets the requirements for fire and police protection. The surface construction is significantly limited and, as a result, no concerns about impact on natural, scenic or unique resources exist.”

“This project is supported by town officials and will provide a positive impact for the development of downtown,” the application said.