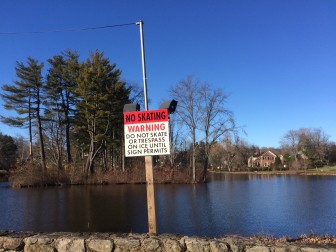 A few cold nights have helped cool down the water and some ice has formed on the pond, “but it’s a long, long ways from what we need to have skating out there,” said John Howe, parks superintendent in the New Canaan Department of Public Works.

“Extended cold weather would help, especially if it stays dry, and if it stays below freezing all day you can develop up to an inch of ice a day. But that would be the maximum, so even if we got cold today, you are talking about a minimum of a [full] week and unfortunately, I don’t see that happening.”

Scores of New Canaanites headed to Mead Pond last February to ice skate and play hockey, including under the lights after dark—at one time a regular annual tradition that changed more than a dozen years ago when the town changed insurers and a full six inches of ice was required to green light it. 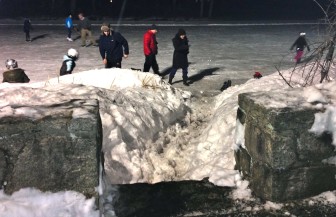 Many attribute changes in temperature patterns—specifically, suddenly warmish, 40-degree days in the midst of a cold spell—with preventing the ponds from freezing over. Others say road salt through the winter washes into storm drains and waterways, raising the salinity levels of the ponds.

Howe noted that the days already are getting longer again, meaning the sun heats up any that forms overnight, and attributed last year’s pond skating to a very cold January.

“My gut reaction is that I would be surprised if we have skating this year,” he said.