Town officials say they’re hoping this week to take steps that will make it safe to skate at Mead Pond. 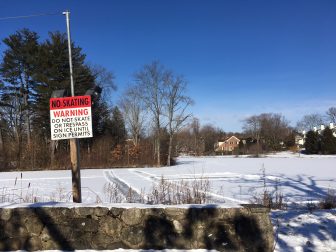 The ‘No Skating’ sign is up at Mead Pond in New Canaan, but perhaps not for long. Credit: Michael Dinan

Though the pond has just four inches of ice right now—whereas the town’s insurer requires six inches in order to open skating to the public—Parks Superintendent John Howe said he’s hoping to clear its surface of snow and add a layer of water to the top in order to create the requisite thickness.

“A little bit of snow on top of the ice works as an insulating blanket, so it keeps the cold air from getting to the ice and freezing through,” Howe told NewCanaanite.com. “So our intention is to put some water on it [on Wednesday] and flood it. That will accomplish two things: We’ll get rid of the snow and let the ice form up instead of down.”

“My hope is that there will be skating by the end of the week,” he added.

Until municipal officials give the all-clear, ice skating at either Mead or Mill Pond is not allowed. Visitors can look for posted signs that spell out whether the ponds are safe for skating.

Because Department of Public Works crews can work on only one pond at a time, residents can expect to see skating open at Mead Park first rather than Mill, Howe said.

New Canaan like the rest of the region has seen sustained freezing temperatures for several days, and the forecast calls for temps to range from single-digits to mid-20s for the balance of this week.

Howe said he was “shocked,” even with the blanket of snow on Mead Pond today, that it had only four inches of ice.

If the strategy works, New Canaan will have ice skating at Mead Pond for the third time in the past decade. The town opened skating at Mead three years ago for several days following a cold spell. Before that, the town had skating for 26 days in early-2009.

About 15 years ago, New Canaan changed insurers, and with a new policy came a new standard: The ponds must be six inches thick with ice, rather than the previous four inches, in order to allow public skating. The parks crew regularly checks the ice for thickness with an electric drill, starting at the edge and then moving in. It’s more difficult to get sufficiently thick ice for skating at Mill Pond, which has faster-moving water beneath it as part of the Fivemile River.