Saying off-leash dogs are disrupting wildlife on the public property, town officials are pushing to rid the Bristow Bird Sanctuary off of Route 106 entirely of canines.

The Park & Recreation at its April meeting voted to request the rule formally by way of the Town Council.

There used to be a “No Dogs Allowed” sign at the Old Stamford Road entrance to Bristow, but there also long has been a dog litter bag dispenser and receptacle, so that creates a mixed message, said commissioner Andrea Peterson. 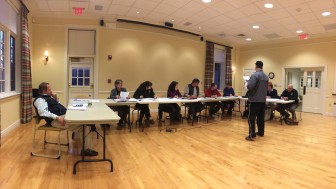 “It should be a wildlife sanctuary, and it was a bird sanctuary and people walking their dogs, it’s disruptive to the birds and especially if people let them off-leash,” Peterson said at the group’s April 9 meeting, held at Lapham Community Center.

Some parks officials raised questions about the move.

Parks Superintendent John Howe wondered whether the change was an accommodation for one person or a consensus among many. He said one recent study at Bristow raised no concerns about dogs there, and noted that there used to be steady foot traffic there with a structure, a type of zoo, displaying exotic animals.

“My question would be: What birds are the dogs bothering?” Howe asked.

“I don’t think there’s a tremendous problem with dogs myself,” he added. 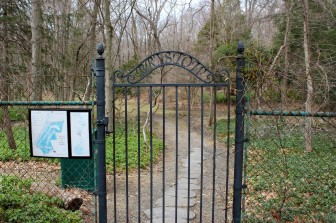 Bristow backs up to Mead Park and is accessible by a trail that runs behind Gamble Field, the far little league field.

Said commissioner Joan Guzzetti: “Just by virtue of the name of the place, it’s called a ‘sanctuary.’ I think it’s kind of a concept, even if in reality there aren’t birds you’re protecting.”

Here’s where Bristow Bird Sanctuary is: