“What would [Martin Luther King, Jr.] say about what’s going on in the world today?” asked Dr. Lindsay E. Curtis, a pastor at Norwalk’s Grace Baptist Church, as he addressed a crowd gathered in New Canaan on Monday morning to remember the late Reverend and civil rights leader. 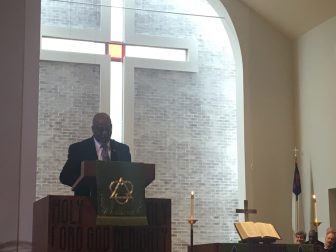 The Rev. Dr. Lindsay E. Carter at United Methodist Church in New Canaan on Jan. 15, 2018 for an annual service of remembrance for the Rev. Dr. Martin Luther King Jr., sponsored by the Interfaith Council of New Canaan. Credit: Charlie Hobbs

One of two first-hand witnesses of King’s iconic “I Have a Dream” speech at the 1963 March on Washington to speak at the community’s annual service, held at the United Methodist Church, Curtis passionately reminded attendees that King’s presence in history is inherently political, and that, should the divide ever-present in today’s landscape ever be bridged, his legacy must be celebrated and upheld not only on his birthday, but year-round.

At the center of Curtis’s speech, delivered during a remembrance service sponsored by the Interfaith Council of New Canaan, was a passage from King’s 1963 open letter, written from Birmingham Jail after his arrest. The quote reads as follows; “History will have to record that the greatest tragedy of this period of social transition was not the strident clamor of the bad people, but the appalling silence of the good people. Injustice anywhere is a threat to justice everywhere … He who passively accepts evil is as much involved in it as he who helps to perpetrate it. He who accepts evil without protesting against it is really cooperating with it.” 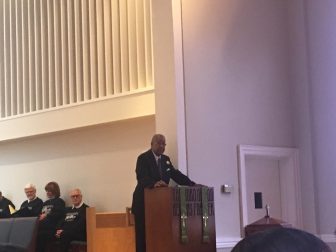 The Rev. Daniel Hickman Sr. at United Methodist Church in New Canaan on Jan. 15, 2018 for an annual service of remembrance for the Rev. Dr. Martin Luther King Jr., sponsored by the Interfaith Council of New Canaan. Credit: Charlie Hobbs

“On Dr. King’s birthday, I always take time to read and reread his letter,” Curtis said. “It challenges me, but it also saddens me. Here we are, fifty years later, and there’s still a call for unification of the races… There is dissention, there is ill-will, some hostility, even some malice. And the pot has only been stirred in these past several months. We are living in a time when reconciliation ought to be the order of the day, but we all have just retreated to our own corner, our own right or left, our own Republican or Democrat, our own white supremacy, our own Black Lives Matter.”

“I question my own church about this all the time,” Curtis continued. “Why are we guilty of being so quiet? Why do we, the Church, see it as somebody else’s problem?… In that letter from the Birmingham jail, [Dr. King] laid out his disappointment in the church; ‘I have wept over the laxity of the church. But be assured that my tears have been tears of love … But, oh! How we have blemished and scarred that body through social neglect and through fear of being nonconformists.’ It is not enough for the church to talk of reconciliation. We must be about it. We must be passionate about it.” 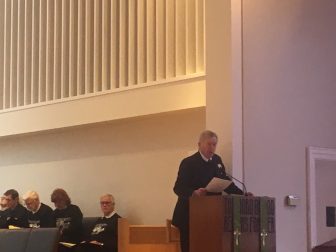 Though he stopped short of naming the president specifically, Curtis went on to tie events of today to those in King’s, saying, “Racism is still very much alive. And, unfortunately, doing well. Things like ‘We want our country back.’ I asked my congregation a long time ago, ‘Where did it go?’. ‘Make America great again….’ What era are you talking about? Birthers, the tea party, police brutality, radio commentators spewing hatred. Bad manners. Some would say that, with President 45—I won’t even say his name—God was trying to get our attention. And, if that’s true, he’s got mine.”

A Chicago native and past-president of the Norwalk NAACP, Curtis was introduced by the Community Baptist Church’s Rev. Daniel Hickman, Sr. as “a leader of leaders.” Curtis was just 11 when he attended King’s speech at the March on Washington, a field trip of sorts chaperoned by his grandparents. 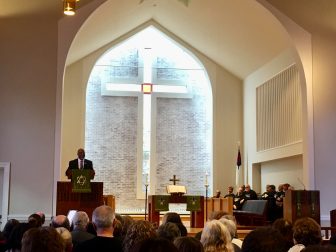 The Rev. Dr. Lindsay E. Curtis of Norwalk Baptist Church addressing those gathered at United Methodist Church in New Canaan on Jan. 15, 2018 for an annual service of remembrance for the Rev. Dr. Martin Luther King Jr., sponsored by the Interfaith Council of New Canaan. Contributed

“I had no idea what was going on,” Curtis recalled. “But I was also there in 2008, facing the opposite direction from the Lincoln Memorial, thinking that this country had turned 180 degrees.”

Gregory Thornewell, who did a reading from the now-iconic speech, was also present on that day, 55 years ago.

“There were so many people there,” Thornewell said. “But then this voice rang out… The people seemed to change, seemed to take on a sincerity, a unification that could not be denied. A sea of people, a sea of color, a sea of races, that seemed to be one.” Thornewell, who had until that point spoken with a calm, quiet dignity, proceeded to deliver an excerpt of King’s speech with the impassioned aplomb that perhaps could only be mustered by one who had borne witness to the original.

In addition to the contributions of Curtis and Thornewell, the 90-minute service featured a welcome by the Rev. Eric Fjeldal of the United Methodist Church, a proclamation from First Selectman Kevin Moynihan, music courtesy of the Serendipity Chorale and the Bassick High School K.E.Y.S. program, and invocation, offertory, and benediction from local religious leaders including Rev. Robert Kinnally of St. Aloysius Church and Asst. Pastor Matt Bubbard of United Methodist Church. Minister Paul Stevens of Curtis’s Grace Baptist Church performed a mime worship, and Jen Zonis of Temple Sinai in Stamford led an interfaith prayer for peace, which featured alternating lines from prayers spoken from the Baha’i, Christian, Islamic, and Jewish faith traditions. Residents of the ABC House of New Canaan and members of the NCHS Class of 2018 Kai Clancy and Josiah Jones also addressed attendees.

Curtis closed his speech with some advice he hoped King himself might have appreciated; “Finish. Don’t tell me how old you are. Don’t tell me about the wars you fought, because there are many yet to come. Dr. King is still teaching us to fight on, to fight the good fight, to stand for justice and education. To be a bridge builder, not a wall manufacturer. To be a respecter of each other. We don’t need to make America great again, but instead need to stand on the shoulders of those who came before us and make America greater.”