Problems of overuse at what long had been New Canaan’s least busy parking lot are expected very soon to worsen, and town officials are trying to figure out how to get out ahead of what some are calling “a perfect storm.”

The past six weeks has seen a dramatic rise in the number of motorists parking in the Locust Avenue lot. In addition to longtime regulars—including people who work on that side of town—“new” users include some personnel and construction workers at the Fire Department (where interior and exterior capital projects are underway), construction workers at the Town Hall renovation site and in-town shoppers, diners and post office visitors who, under normal circumstances, would park behind Town Hall itself or in one of the lots that rise behind it (toward Park Street). 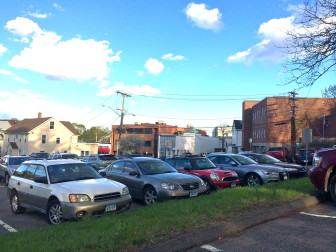 Starting in August, demolition and construction work is expected to start just down the hill on Forest Street, where a 3-story residential-and-retail complex is going up.

“There is a perfect storm that is exploding over there,” Parking Bureau Superintendent Karen Miller said at the group’s May 1 meeting. “And I won’t lie to you: It’s very bad. The lot is filled. People are coming [and] in the morning, it doesn’t look too bad. But between 10 and 2 it is a disaster.”

The town has issued 128 parking permits for the 155 spaces in Locust lot—“overselling” is standard practice and typically not problematic—and in recent weeks some of those permit-holders say they cannot find a space, commission Chairman Keith Richey said during the meeting, held at Lapham Community Center.

Possible steps the commission could take, Richey said, include not renewing some permits or else designating more of the pay-as-you-go spaces for permit-holders.

Though the group took no formal action to address the problem, all agreed a solution is needed prior to construction down on Forest. 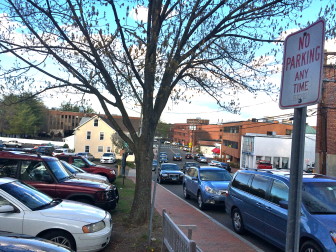 Endlessly quotable commission Secretary Rick Franco, owner of Francos Wine Merchants on Elm, noted that although the problems are serious, they’ll go away when school lets out.

“It will only last for six weeks, because as far from reality as New Canaan might be, you can further escape reality by going to Nantucket, where the people will go after the third week of June,” Franco said, drawing laughter from the room.

According to Luchessi, those businesses “in order to function, in order to be in town, need to have a place for their employees to park.”

“The only feasible parking, the only reasonably priced parking there is in the Locust Street lot,” he said.

The three construction projects’ dovetailing is a worry. Town Hall won’t be ready until next spring at the soonest, work will continue on the fire station through this summer and work on Forest is expected to start before August. 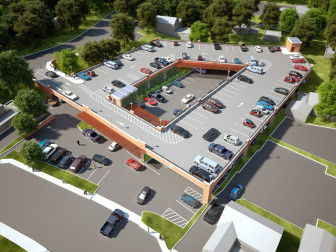 Here's a rendering of the postponed parking deck at Locust Avenue.

Crum noted that the commission ran into resistance in its urging some time ago to build a second parking deck at Locust—postponed now at least until Town Hall is done.

“We have asked numerous times that the Locust lot be double-decked prior to any of this construction, and we were told ‘No,’ ” Crum said. “It’s been put off. And this is reason why the Parking Commission asked for this, because we knew there were going to be problems.” 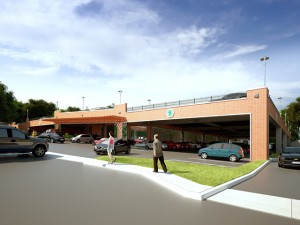 Another rendering of what the Locust Avenue lot could look like after a parking deck is installed.

One set revolves around the idea of requiring construction workers to park at a lot off-site and carpool or otherwise find a way to their construction sites. Possibilities discussed very briefly at the meeting include the lot out back of the New Canaan Historical Society, Transfer Station/Highway Department area (by Lakeview Cemetery) or even, as New Canaan Chamber of Commerce Executive Director Tucker Murphy suggested, Irwin Park—presumably the lot immediately on the right on entering the Weed Street property. Ogilvie put in that the Getabout has six vans and one hasn’t been used in a month, so that’s a possibility for transporting the workers.

Miller had a backup plan, in case the off-site suggestions didn’t work.

“I would recommend that if that doesn’t come through and we cannot get those construction people out of there, that we try them in the back 20 spaces in Park Street, for instance, to at least get them in a location that is not as popular right now,” she said.