Led by a New Canaan family and joined by local police and public officials, an estimated 2,000-plus people held a peaceful protest in town Thursday evening. 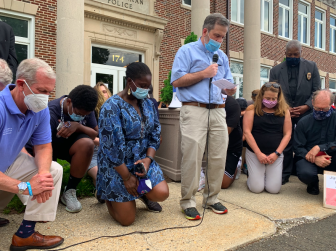 Calling for an end to police brutality and racism in the wake of the May 25 killing of George Floyd in Minneapolis, the protesters marched from Saxe Middle School along South Avenue to the Police Department—where town resident Fatou Niang and her son, New Canaan High School senior Ethan Niang, joined local clergy and Police Chief Leon Krolikowski, among others, in addressing the crowd—and then down Church Street to Main Street and back to Saxe.

Fatou Niang thanked New Canaan Police for providing security for the march and for the department’s continuing service during the COVID-19 pandemic. 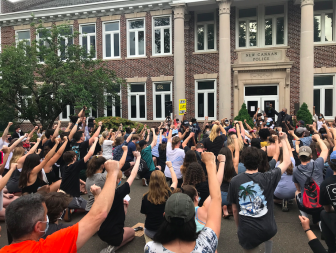 During the peaceful protest of June 4, 2020. Credit: Michael Dinan

“This march is not against the police in general, but against the minority of police officers in certain cities who abuse their power against defenseless black citizens,” she said. “We appreciate the support of those who came to march with us today.”

She said that her son, Ethan, with a few friends from NCHS and church, formed the idea of marching peacefully.

“This march is to express our collective deep sadness at the death of an innocent man, but also to recognize that we have to do better to address race relationships everywhere in this country, including in my own town,” she said. 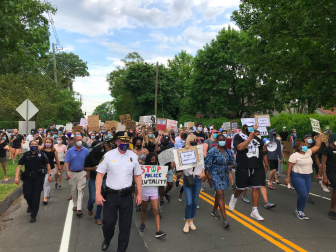 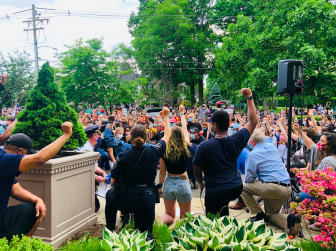 Police officers kneel and raise fists along with protesters in front of police headquarters during a June 4, 2020 peaceful protest. Credit: Shiva Sarram

“There is an incredibly beautiful spirit in this community, and it is a spirit that many people might not know is there,” Walsh said.

A trio led the crowd in the national anthem.

Marchers filled the entire width of South Avenue for blocks as they approached police headquarters, chanting “Justice for Floyd,” “No justice, no peace, no racist police,” “I can’t breathe,” “Hands up, don’t shoot,” “Black lives matter,” “Justice for one, justice for all,” “No more murders,” “Get off my neck” and “Say his name, George Floyd, say her name, Breonna Taylor.”