We were the last people anyone would pick to be on a kickball team because we were terrible at fielding kickballs (I tended to get hit in the head with the reddish rubber globe). He gifted us that moniker because we stood in the outfield chatting. We stood in the kicking line and chatted. I recall him saying, “Ladies! You know there’s a kickball game going on, right? You’re a bunch of tea party ladies out there!”

Boys rolled their eyes when we ended up on their team. Occasionally we would get on base, but not one of us was a reliable teammate for kickball. 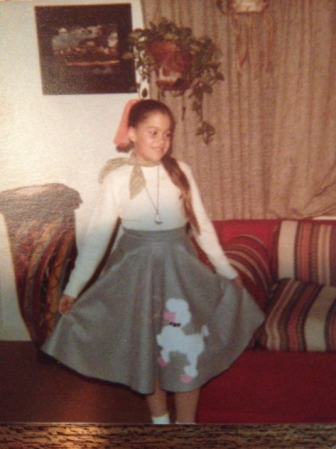 Six of us comprised the Tea Party Ladies, and that fifth-grade year we were all ’50s girls for Halloween, thanks to the poodle-skirt sewing talents of Dana Pucillo’s mom. I am sure the phone calls between our mothers happened behind our backs, much like the goings-on today about when to let someone walk into town from Saxe or when to get a cellphone. In our blissful ignorance, we were ’50s girls, and Halloween was the bees’ knees.

Dana and I grew up on Parade Hill Road, Tara lived on the golf course of the Country Club of New Canaan as the head groundskeeper’s daughter, Allison was on Oak Street, and Lorie and Rachel lived on South Bald Hill and Ludlowe, respectively.

The big question was: Where to trick or treat?

Since two of us were on Parade Hill and the houses were closer together, we could get more bang for our Halloween buck in terms of candy. Oak Street was great, too, but the moms opted for Parade Hill. One of the dads walked around with us, and we, the Tea Party Ladies in our grey felt skirts and high pony tails, were living the dream.

As we got older, we remained friends but branched out a bit, too, and other neighborhoods became the ideal for trick-or-treating.

Definitely Hoyt Farm Road and its offshoots, where somehow a raw egg ended up in my shoe, likely inserted there by my friend Jen in seventh grade. I always heard that Putnam Road and South Avenue were popular places, and their Halloween traffic has grown with all of the development of those streets. As a young girl, I had never heard of places such as Woodridge Circle because they weren’t in the Center School district, but now, what a woodsy backdrop and perfect length for a Halloween walk—so long as one has a large flashlight!

Even today, kids and adults alike know that Kimberly Place is the hotspot for candy and costumes with its stretch of fun families and ideal cul-de-sac.

Sometimes we New Canaanites go a little overboard when it comes to our kids getting the full Halloween experience with parties at school, a townwide Halloween Parade, activities at Waveny, actual trick-or-treating on Oct. 31, and whatever private costume parties are held around town.

Maybe we think that a massive storm will come through and ruin plans so it’s best to have multiple celebrations planned, or maybe we just want our kids to have it all. Either way, those Halloweens of yesteryear with the Tea Party Ladies, and all of the fantastic trick-or-treating neighborhoods we have, provide yet another reason to smile about a place we have all chosen to call home. Unless you’re the guy on Parade Hill Road who forgot it was Halloween in 1980 and came to the door in a towel to see what the ruckus was on his front step.