Next week, the Carriage Barn Arts Center is launching an exhibition that will put on display for the public, for the first time, the Cuban artwork that Greenwich residents Steve and Terri Certilman—both attorneys—have been collecting for decades.

“Absolut Kuba” opens April 24 and will be followed on May 17 by “A Night in Havana,” Carriage Barn Arts Center’s inaugural benefit. 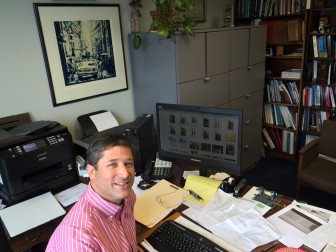 In reading some background on the new exhibition and curious to know more, we asked to connect with the collector, and our conversation with Steve Certilman is transcribed in full below. A photographer himself who even through law school nursed his abiding interest in the arts, Certilman came to discover Cuban art himself by chance, and quickly became fascinated by the work as well as its creators.

The collection he and his wife have amassed and soon-to-open exhibition it forms are singular for Carriage Barn Arts Center, said Rebecca Stedman, a co-chair of the event together with Serena Gillespie, Barbara Calaba and Stacey Essex.

“It’s something we haven’t done before at the Carriage Barn Arts Center, to bring a collector’s private art collection that they themselves have curated, to New Canaan and Fairfield County,” Stedman said. 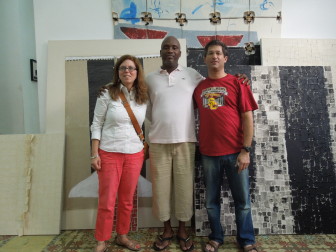 Asked why the Certilmans’ collection in particular is a good candidate for this debut of a private collection, Stedman said: “We have a private collector who is interested in supporting the Carriage Barn Arts Center and its mission statement—supporting the arts and art education—and this collection exemplifies what the collector has committed himself to do for these artists and the meaning of their art in Cuba.”

Here’s our conversation with Certilman.

New Canaanite: I want to talk to you about the exhibition itself, but first I want to hear about you. I understand you’re a Greenwich resident. How long have you lived in this area, Steve?

Steve Certilman: Since 1986. What does that make it? Twenty-eight years.

That might be wishful thinking for me. I’m an attorney, arbitrator and mediator. And the gallery is a nice, creative diversion. 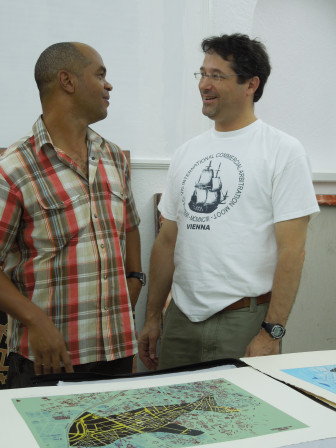 Well, this just got a lot more interesting for me. I need to hear and understand: What has your abiding interest in art been and have you professionally always been working as an attorney?

Yes, I went straight out of college to law school and as soon as I became a lawyer, I volunteered with Volunteer Lawyers for the Arts. I always had an empathy toward creative people and an interest in the arts, and I’m drawn to color, so I love to be surrounded by it and color in all sorts of media. So when I was in high school, in college, I had posters and when I went to law school, I managed to buy some small prints and then—

—Where did you go to high school, college and law school?

I grew up in Woodbury, New York, which is on the north shore of Long Island. So I went to Syosset High School, and Connecticut College in New London and then Hofstra Law School in Hempstead, New York.

And growing up as a teen into law school, which then launched your professional career, what had been your interest in art? What had been this developing support you felt for artistic types? 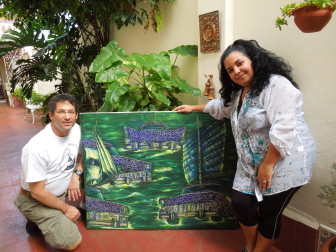 Well I had taken some art classes, though not many. I got into photography in high school. I think they called it “industrial tech.” I don’t know if they still do, but that was a mandatory course for all young men. We learned how to use saws and drills and all those manly things, then one other component of industrial tech happened to be photography. So this was probably eighth grade. So I picked up a camera and I’ve never put one down since, and I enjoy taking photographs of usually places I travel now, but occasionally I pick it up and use it around town or I see a contest that I want to enter and I have entered contests and had a few publications in a couple of winning photos.

Let me ask you, was photography or art in some other form a prospect beyond what you’ve called a hobby, for you? Was it something you ever considered pursuing to a greater degree in creating work yourself?

No, I think I was always focused on becoming a lawyer. It suited a lot of my personality traits then, but now or really as an adult, I realized that I wanted to have more of a creative side than I was finding in law, so that’s when I began to spend more time doing things related to art.

What age are you? 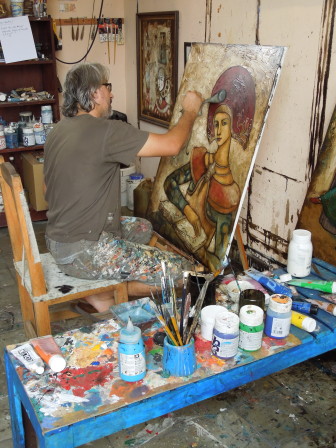 Carlos Guzman at work in his studio. Contributed photo

And how did you hook up with Arianne [Kolb] and Carriage Barn Arts Center?

Arianne and I met when she was active at the Bruce Museum. I’m on the museum council at the Bruce and Arianne, I believe, was the chair of the council at the time, and I had done a walk-and-talk around our house for museum council members and trustees, telling them about the art. And Arianne was there and she saw it, and then when she got the position as co-director of the Carriage Barn, I think she was looking for something that would be fun and interesting for this time slot and asked if I was interested in putting our collection to use in creating this show.

OK, and I have a sense of this because you mentioned you always liked color. Talk to me about you and Cuba. My understanding is you’ve been going there for many years and paying attention to artwork. 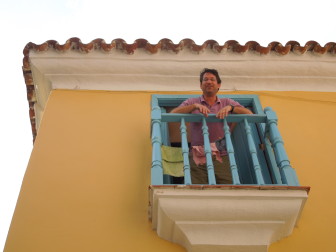 Steve Certilman on the terrace of the studio of painter Manuel Lopez Oliva. Contributed photo

Right. Me and Cuba is really quite serendipitous. I don’t have any Cuban in my family history. The way it occurred was, I met my wife when we were both in law school, and her mother and father had been collectors and dealers of Haitian art since the ‘70s. And we went to Haiti with them quite a few times and the process was always the same. We ran around, going from artist’s studio to artist’s studio, getting to know them, looking at what they had, negotiating to buy the art, in another language. Having these experiences that were really fun and interesting that I loved and so that was something really special in our lives. But when the revolution in Haiti occurred in the early ‘80s, about 1983 or ’84, we really couldn’t go back there anymore. So we had a kind of a hiatus, and then in 1998, my in-laws obtained a license from OFAC—the Office of Foreign Assets Control—here in the U.S., which enforces the travel restrictions and trade embargo, paid for a license for them to go to Cuba to check out the arts scene there and ‘Did we want to go?’ And of course the answer was ‘Sure. Why not?’ And we went down with them and discovered this incredibly vibrant, thriving arts scene, which was very similar to what we had experienced in Haiti, only from my point of view, much better first of all, because I at least knew some Spanish, whereas I had to make it out as I went along in French, in Haiti. But also because the artists we tended to encounter in Haiti were older-school people, and the ones we encountered in Cuba could be anywhere from 18 to whatever, but a much younger median age, and we really enjoyed that. I particularly enjoyed the interactions. The first trip was with my in-laws and we bought a few pieces and went back the next year and bought even more and then I realized: I love this. It’s very stimulating, it gets me out of my comfort zone and forces me to communicate in a language where I have to struggle a little bit to get my point across. But also to develop relationships with people that, A. I don’t really know and, B. I have to work at even verbal communication. And I felt very stimulated by that, as well— 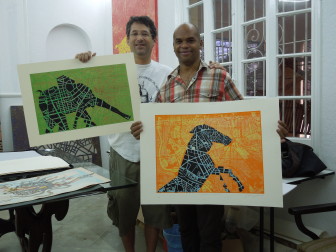 —How often do you go there, and how many pieces do you own now?

Well, I go annually and my wife not quite so often, and I’m trying to work it up to twice a year. But that’s really going to be a factor of how I manage my law practice, my arbitration practice. I have to carve out the time for it. I think I’m getting close to ready to move it up to twice a year.

How big is your collection?

And are those in storage or does everything sort of fit in your house?

Well, we have flat files and racks for pieces that are not up on the walls displays. 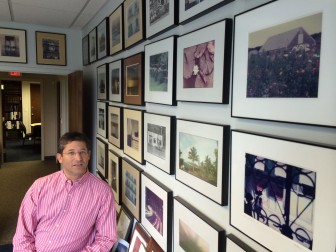 Are we talking paintings exclusively, Steve?

No, I have all sorts of media. Paintings, drawings, wood sculpture, some installation pieces, bronze sculptures, photographs.

Is this going to be the first time—and I know it’s you and Arianne together—curated what you have built up over all these years into an exhibition for public viewing?

Yes, we have loaned pieces to quite a number of other exhibitions over time but this is the first time the focus is on this collection.

To me, that’s pretty significant. This has been something in general that has interested you your entire life. You by serendipity, as you say, get turned onto Cuba. It becomes something beyond just a hobby, the way some of us play fantasy baseball in the summer, type of thing, for you. This is something where you now have hundreds of pieces, you’re looking to go twice a year, and now you’re stepping up to sort of a public stage so to speak. What does this mean to you, the fact that this now becomes something for people beyond a kind of invite-only audience in your private home, to be able to experience and enjoy?

That’s really been my ambition along and that’s the reason I created the Web gallery, DiscoveriesInArt.com. Education is really an important part of what I like about it. This is a place that most people don’t know much about, maybe have some misunderstandings about and it’s also a very unique place in the world. The political, economic, social conditions there really catalyze the thriving arts scene that you experience there. And so being able to show people that and tell them about the art which I find so interesting because it’s filled with double entendre and oblique references to politics, to emigration, which is something that looms over their lives because nearly everyone loses friends to emigration, isolation, because they live on an island, they’re only 90 miles from this 800-pound gorilla and yet the embargo and travel restrictions leave them so isolated.