Though two neighbors filed objections citing what they described as potential loom, town officials on Tuesday voted 7-0 to approve a second story addition at a Summer Street home. 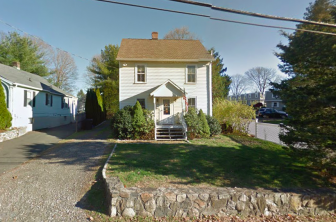 In approving the addition planned for the rear of 160 Summer St.—a ca. 1870-built, single-family home on about .2 acres, according to tax records—members of the Planning & Zoning Commission that it’s an attractive alternative to what’s there now and planned for the type of awkwardly configured lot for which Special Permits are designed.

“I think the proposed design is compatible to the neighborhood and the increase in height is only two or three additional feet,” Commissioner Kent Turner said at the group’s regular meeting, held at Town Hall. “So I do not believe it creates a significant impact on neighboring properties and I think it should be approved.”

A look at the rear and left elevations of the planned addition at 160 Summer St. ADA Architects

Planning & Zoning had received two letters from concerned neighbors who live in condominiums around the corner on East Avenue.

Albert and Pamela Miller said they objected to the permit application and are “concerned that so many structures,” citing the new four-story units at Mill Pond specifically, “are taller than they should be in a residential area.”

Another resident, Daniel Laline, filed a letter saying that the addition would create a “dominating structure” allowing less light and air flow in the area. Laline—also citing the complex at Mill Pond, say it “is larger than regulation”—asked in his letter, “Would you want it in your backyard?”

A special permit was needed because the addition is to exceed the maximum allowable building and total heights for side yards in the B Residential Zone under the New Canaan Zoning Regulations—20 and 25 feet, respectively (see page 63 here). A special permit also is needed because the driveway is to remain up against the property line, not three feet off of it, as has been required for 11 years under the regulations (page 66).

David Rucci, New Canaan-based attorney with Lampert, Toohey & Rucci LLC representing the applicants, said the home has a contract purchaser whose decision to move forward hinged on whether the addition was approved.

In addressing P&Z, Rucci questioned whether Laline himself at a distance of some 150 feet would really be affected by the project.

Noting that the lot’s width runs from between about 42 and 47 feet for its entire length, Rucci said abiding by 16-foot setback rules on both sides would mean conforming additions would create “an Eiffel Tower effect.” He added that plans include shifting the house out of a side yard setback where it currently sits and that existing screening—for example, between the rear of the house and Essex Ridge condos—will not be removed.

He was accompanied by the architect for the project, Bill Andriopoulos of Norwalk-based Andriopoulos Design Associates LLC.

In a narrative that formed part of the application, Rucci spelled out the way the project meets the various Special Permit criteria, as follows: